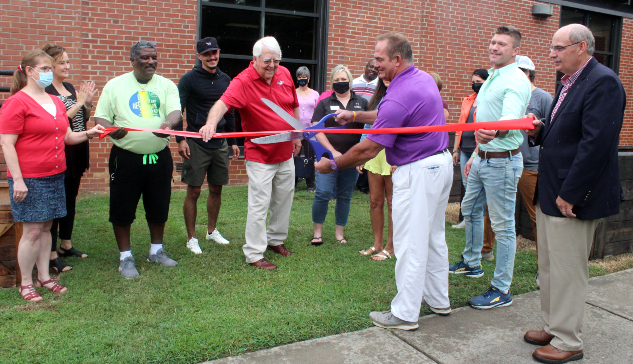 Paul Peters cuts the ribbon at the ceremony dedicating the flower beds at the E.E. Waddell Center. (Photo by Charles Curcio/staff)

Many times, ribbon cuttings by the Stanly County Chamber of Commerce involve the opening of new business.

This was not the case recently at the E.E. Waddell Center for the unveiling of updates to the facility.

In a partnership with the Nehemiah Project and the City of Albemarle, renovations to the library and the addition of new planters were unveiled in a ribbon cutting ceremony.

The library features new cabinets and benches for seating with added storage room underneath them, along with new desks for the facility’s computer lab.

Albemarle Mayor Ronnie Michael welcomed attendees to the ceremony saying the Nehemiah Project has “brought a valuable resource to the Waddell Center.”

Albemarle City Council members Martha Sue Hall, Martha Hughes and Dexter Townsend attended the ceremony along with other members of the community.

Paul Peters, director of the Nehemiah Project, said his group has been waiting for this day for a long time.

The project of the flowerbeds started 2.5 years ago, he said, when his group identified the Waddell Center as a community partner. The Nehemiah Project looks to serve people in six categories: the homeless, those suffering from addictions, veterans, at-risk adolescents and domestic violence survivors, senior citizens and those suffering mental health problems.

The flower beds will allow kids and seniors served by the Waddell Center to raise vegetables in them. The crops raised will be used in cooking classes at the facility.