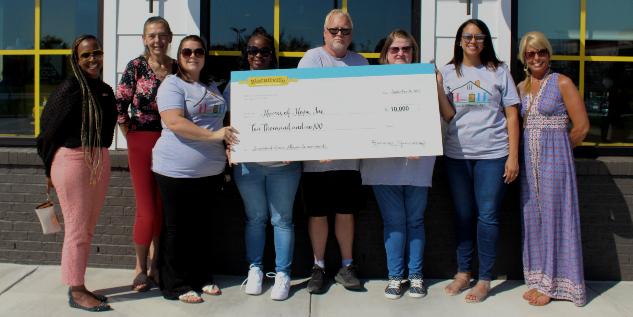 Biscuitville employees presented members of Homes of Hope with a $10,000 check at the restaurant's grand opening. (Photo by Charles Curcio/staff)

A new fast-food breakfast restaurant which opened in Albemarle last week showed part of its mission to reach out to the community.

Biscuitville, which features breakfast every day from 5 a.m. – 2 p.m., made a donation of $10,000 to Homes of Hope Stanly as part of its grand opening.

Homes of Hope Stanly is a nonprofit which provides transitional housing, including the Community Inn in Albemarle. The organization looks to get homeless people back on their feet, according to the group’s website.

Kristie Mitchell, vice president of brand and narketing for Biscuitville Fresh Southern, along with Alon Vanterpool, director of marketing, presented the check to Shanta Watkins, director of Homes of Hope.

Vanterpool said the company “takes pride” in figuring out what the special needs are in a community in which they have a location.

“Why we do that is because you’re allowing us into your community by allowing us to build our restaurant,” Vanterpool said. “We want to give a token back to you, to the community.”

She said Biscuitville looks for organizations which may be less known than larger groups, which is how the company found Homes of Hope.

“We love what you do. We love the mission of what you do. The fact you are helping those who are homeless to get out of being homeless, to a home of their own, was so touching,” Vanterpool said.

Watkins said Homes of Hope said families they help attend workshops and perform hours of volunteer service with the goal to find them permanent housing.

She shared the story of one single mother with three kids and their journey from being homeless to recently signing the lease on a four-bedroom house.

“She took advantage of every program we had,” Watkins said.

Biscuitville is a Greensboro-based company with locations throughout North Carolina and Virginia. The Albemarle store is the 69th store to open.

In business since the mid-1960s, Mitchell said Biscuitville is unique with its scratch-made biscuits made fresh every 15 minutes. Biscuitville also has griddle-poured pancakes and bacon cooked on the griddle.

“We have no microwaves,” Mitchell said.

The company partners with local vendors in the Carolinas for chicken, flour and other supplies.

The biscuits, which people can watch made through glass windows, have three ingredients: shortening, buttermilk and locally sourced flour.

Keeping the sources local, she said, helps for ingredient integrity.

“People, especially these days, want to know where their food comes from, so we can tell them,” Mitchell said.

Anything that can not be locally sourced has to be family-owned, she added.

Regarding the donation, Mitchell said it is part of the company’s core values.

“Our purpose statement here is enhancing lives by serving others.”