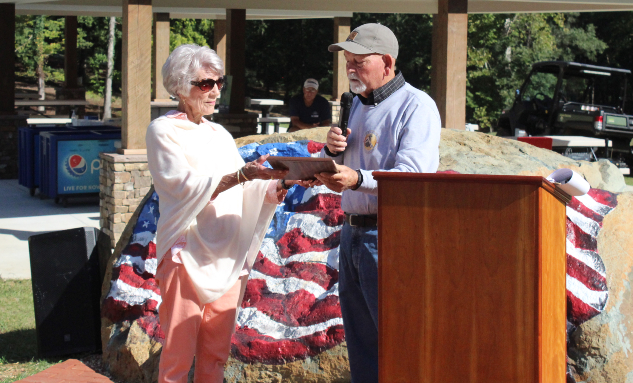 Margaret Ivey, left, is presented a plaque from Mayor Tate Daniels for the Ivey family's contributions of the land to New London's new park. (Photo by Charles Curcio/staff)

New London’s new park has hosted many events since its opening, but finally enjoyed a formal dedication ceremony recently.

The town also unveiled a memorial plaque sitting at the foot of a ceremonial rock with the American flag painted on it. The plaque thanked the members of the James Wallace Ivey Jr. family for their donation of the land for the park.

“It was a major donation,” Daniels said, “and we certainly appreciate it.”

“We are so grateful that (the town) could use the land,” she said. “We’re happy to have donated this land. It’s always been a beautiful site for me.”

Ivey noted the land was across from the former New London Elementary School, where she taught for seven years.

Daniels said he grew up in a house right next to where the park is now. The property was a mobile home park in the 1960s and 1970s and existed for about 45 years, the mayor added.

After the family donated the land to the town, Daniels said the town “was not sure what we wanted to do, but it didn’t take long for us to decide that it would be a beautiful place for a park.”

Currently, the park has three permanent picnic shelters on it, two smaller ones and a larger one, with restroom facilities and permanent cornhole boards. A paved trail works through wooded areas of the park while a fenced in area off the trail was set aside as a dog park. Children can play on the playground between the shelters and have an area of rocks on which to play as well.

Two of the trails attach outside the park to Christ the King Christian Academy and North Ferry Road. Daniels said those connections prevent people from having to cross U.S. Highway 52 or walk down the highway to get to the park.

The park also has 13 benches donated by local individuals and businesses.

Bricks laid at the flagpole were purchased by local citizens honoring family members.

Originally, the town received a matching grant of $275,000 from the state, but the ultimate cost of the park was around $1.25 million, the mayor said.

“There is a tremendous amount of work that has been involved in this park,” Daniels said.

The opening, Daniels said, completed Phase One of the park project. He said the council has discussed several ideas for the next phase. The park may get new shelters in the woods, including one in an open area in the middle, as well as an amphitheater. New London Park may also get a new community building, according to the mayor.