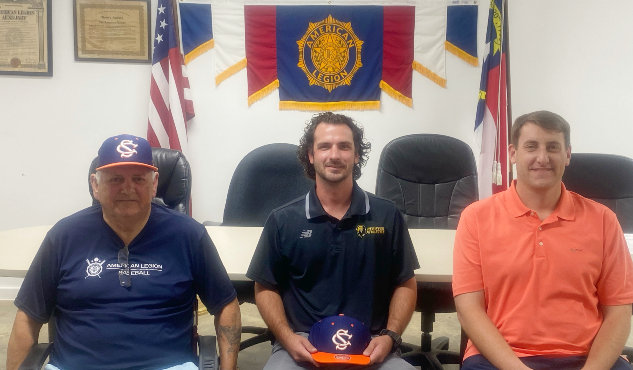 American Legion baseball in Stanly dates back many years, including the 1940 Junior World Series Champions.

After the program did not compete in 2021, one year after seeing a season cancellation because of COVID, a former Post 76 officer has helped assemble a new program moving forward along with the hiring of a new head coach.

Craig Bolton, a 2016 Pfeiffer grad who played for and now coaches the Falcons’ baseball team, has agreed to coach the new Post 76 team.

This team, as in previous years, will stretch beyond the borders of the county, according to Tony Morris, Legion baseball committee chairman. With no senior Legion team in Montgomery County, high school players from the neighboring county may play for Post 76.

Being in that atmosphere around the World Series “was a big part of me learning to love baseball and growing into who I am today.”

The Post 76 coach said “to be able to give back and coach a Legion team myself is exciting.”

Looking at Legion ball as compared to travel baseball, Bolton said there is a lot of good with both. However, he added, “the lost art in travel ball sometimes is winning, what it takes to win and how to win as opposed to just showcasing yourself.”

Bolton said Legion baseball “teaches (players) to be better people and grow into young men. At the same time, you care about the person and player they are. You’re still going to do your job of getting them to other schools and getting schools to come look at them and recruit them.”

When Bolton played Legion ball, he remembered being on a strict schedule every day, the experience of which is similar to playing college baseball.

“You have school every single day and then you start practice when you’re able to start your fall or spring season,” Bolton said. “I think Legion provides the opportunity for kids to learn exactly what that’s going to be like when they move on after high school.”

The Pfeiffer coach added he wants to build the program back to what it was when the community was more involved with the team. He said he wants players to feel comfortable playing for Post 76, to make it their home and take pride in the team.

Over the years, coaches like former Atlanta Braves bullpen coach Marty Reed and others have coached Post 76 who were not active high school coaches. Bolton said being the Pfeiffer coach gives him “basically an outside view as opposed to feeling like somebody on the inside.”

Morris said baseball players do not have to play travel ball now to play in the summer for a college head coach with Bolton’s hiring.

“It’s going to mean a lot for our program by having Coach Bolton,” Morris said.

He added he felt the turnout for players to play Legion ball would be greater with a college coach.

Morris said he, Bolton and Post 76 athletic officer Wil Huneycutt will speak to Stanly and Montgomery high school coaches and players this month to gauge interest in the new team before sign-ups open in November.

The new Post 76 team may also get to play some different teams in exhibitions or non-conference games this season, Morris added.