Albemarle, South Stanly face off with 1A playoff bid on the line 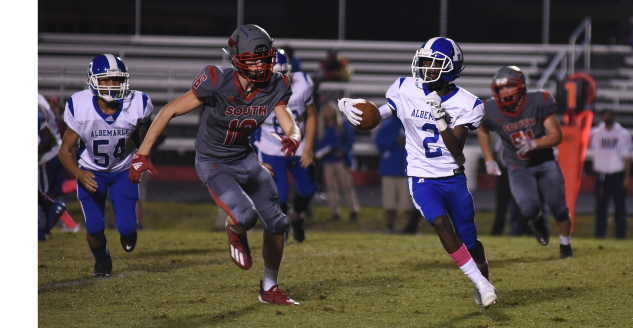 Albemarle's C.J. Ellis (No. 2) tries to get past South Stanly's Matt Fleming in Friday's game. (Photo contributed by Starla Whitley)

Conditions at K.L. Young Memorial Stadium challenged both the Bulls and Bulldogs to play on a rain-soaked field, which got progressively worse as the rains returned just as homecoming festivities were getting underway at halftime.

In a game which will determine who secures the Yadkin Valley Conference’s 1A champion and a guaranteed playoff bid, Albemarle ended a five-game losing streak with a 14-0 shutout of South.

It was the defense of the Bulldogs (1-5, 1-1 YVC) which broke a scoreless game open in the final three minutes of the first half. Albemarle had just been stopped on its fourth offensive drive of the game and punted down to the South 12-yard line.

South Stanly quarterback Trevor Tucker tried to avoid the Bulldogs rush in the pocket by floating a pass over the middle to a receiver. Instead, waiting on the pass was Albemarle’s Jason Wall.

“I was just standing there and (the ball) came to me,” Wall said. “I was a little bit nervous because I didn’t want to drop it.”

The sophomore cornerback pivoted to his left and sped towards the corner of the end zone 18 yards for a touchdown. Dre Davis, starting at quarterback for Albemarle, then handed off to Omarion Hinson for the two-point conversion and an 8-0 lead.

South’s deepest drives into Bulldog territory both came in the first quarter. The Bulls (1-5, 0-2 YVC) took the opening kickoff to the Albemarle 40 after a return by Taewan Morris coupled with a 15-yard facemask penalty. South drove to the 18-yard line but a holding penalty and the Bulldogs’ defense forced a turnover on downs.

The Bulls then forced a three-and-out and a bad punt snap by Albemarle gave South a drive starting at the Bulldog 19. A three-and-out by South set the Bulls up at the 16-yard line for a field goal attempt. However, the snap went past the holder and rolled out to midfield before the Bulldogs recovered the ball.

When only one bank of lights came back on, the game was further delayed until temporary lighting was brought in from Stanly County Emergency Services. The delay lasted 45 minutes before both teams returned and went through warmups, then continued the game.

As play resumed, Albemarle faced a 3-and-7 at the Bulldog 7, but an offsides penalty on South and a Malik Watkins run kept the drive alive for the visitors. Another bad snap was picked up by Davis, who turned it into a positive gain. Three plays later, the Bulldogs got 55 of their 156 yards gained on the ground when C.J. Ellis sped past the South defense on the visiting sideline for a long touchdown run.

Ellis, who had only 21 net rushing yards on three carries before the touchdown, said he was waiting to break a long one and he knew it was coming.

Keeping the ball on the ground using Dre Davis at quarterback instead of previous starter Andre Artis brought a “different dynamic” to the game, Albemarle head coach Richard Davis said.

“Andre is a great player; he will still do good things for us,” Coach Davis said. “Dre is a little more fleet-footed, so we were trying to take advantage of what we thought would give us an edge on them.”

The Bulldogs’ coached praised his defensive line for pressuring Tucker, noting the return of defensive tackle Tyquan McDonald to the lineup after missing the past two weeks.

“That speed is something to deal with off that edge,” Coach Davis said.

Regarding the Ellis TD, Albemarle’s head coach said they had changed the blocking on the play, crediting Jaylen Pinkney with providing a critical block on the play.

The win puts the Bulldogs in position to claim the YVC’s top 1A playoff seed. Albemarle needs a win in two weeks at home over Union Academy to do just that.

“I told the team we are in the driver’s seat on the 1A side,” Davis said.

“We are sitting 0-5 (before the game) and all the negativity in the kids’ minds…but the kids just came out and played.”