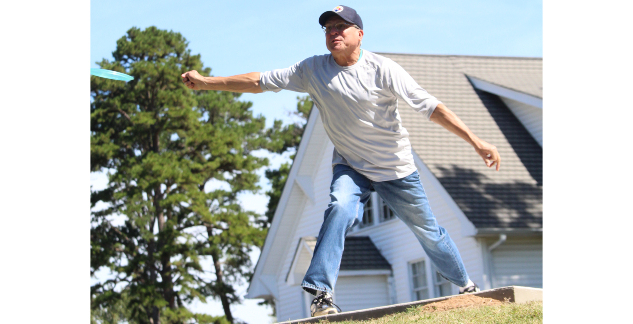 Jack Frank tees off Hole No. 8, the "Island Hole" in the shadow of the 1913 Badin Inn buildings at the Hardaway Point course's recent grand opening. (Photo by Charles Curcio/staff)

The sport of disc golf has grown to include just short of 9,000 courses worldwide. Of that number, about 80 percent are public courses or are in public parks.

Stanly got its first private disc golf course recently when Hardaway Point opened on the grounds of the 1913 Badin Inn.

The disc golf course on the grounds of the former Stanly County Country Club has an 18-hole course which changes elevation going up and down the hills near the inn. The 18th-hole starts on the top of the hill and works its way through the woods, then past the clubhouse and inn down Falls Road.

Along with the course, featuring new concrete tee pads and DISCatcher pro targets, the facilities now have a bar and game room on-site and a pro shop. Many of the existing cart paths can be used for golfers pulling their own carts behind themselves.

The course is the longest of the five disc golf courses in the county at more than 7,000 feet.

According to course designer Bryon Carter, the completion of the course took about 11 months because of the COVID-19 pandemic and weather.

Seeing the grand opening, which included a 51-person tournament, was a mix of fear and excitement, Carter said.

“I’m a perfectionist…I guess I’m excited, but I designed, installed and basically did everything,” Carter said of the golf course. “Pretty much everything came together today.’“

The day of the opening was nothing but positive comments from the competitors, he added.

“I’ve talked to people who came through the hardest part,” Carter said, which is keeping your disc in bounds. ”Everybody says it’s even better than we remember. They’re all super positive today, overwhelmingly positive.”

Playing on a more open course, he added, is satisfying “if you like watching discs fly.”

Carter said the local disc golf community, including the Albemarle Disc Golf Club, has provided support, but the Badin Inn owners Jennifer Owens and Vanessa Mullinix “put out a good amount of money to make this happen.”

Mullinix said she felt satisfaction in seeing the golfers playing in the tournament at the grand opening. She said she loves to ride round in the afternoons and look at the grounds.

“It’s beautiful. I love seeing people on the course,” Mullinix said. “When I look and I see people playing, I think ‘What’s better than this?’ ”

The goal is to make Hardaway Point a family place, including the game room with a pool table, air hockey and such.

“God has blessed us every step of the way,” Mullinix said about the inn and the new course. “It’s a tough course. It’s a good workout.”

The plans for the course are to sell yearly memberships, and rounds at the course will be $5. The course is scheduled to be open year round.