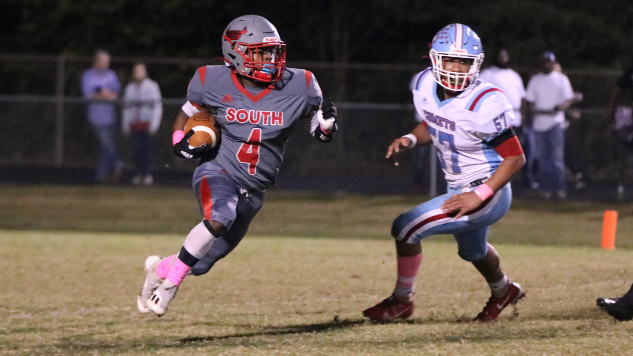 With both teams coming off losses last week, North Stanly and South Stanly entered Friday’s game looking to bounce back.

From the first offensive play of the game, though, the Comets got out in front and dominated both sides of the ball in a 46-0 shutout victory.

The win was the Comets’ seventh in a row over the Bulls, narrowing the gap in the all-time series between the two schools, along with posting just the fifth shutout of South by a North team in the series. South still leads the overall series 26-23.

North (3-3, 2-1 YVC) got two defensive touchdowns in the game, both coming on interceptions. The first of those scores came on South’s first offensive play. An attempted screen pass was picked off by defensive lineman D.J. Watkins. The junior promptly returned the ball 24 yards for a touchdown in the first 20 seconds of the game.

“I’m not going to take the credit. My teammates get the credit…we just saw (a chance) there to make a big play,” Watkins said. “We were talking about no matter what playing full speed every play. That’s what I love about this team…they go full speed. It’s a brotherhood.”

Comets head coach Scott Crisco said his team was expecting South to run a screen, but not on the first play of the game.

North also scored on the team’s first offensive play from scrimmage. Quarterback Luke Shaver scrambled 38 yards down the home sidelines, getting an enormous block from running back Karee Dykes, for a touchdown.

The Comets scored twice more in the first quarter and led 26-0, including a 26-yard TD run from Dykes. The senior running back led the visitors with 133 yards on 17 carries.

Setting a fast pace, Crisco said, was something the team talked about all week.

“We talked about our offense, defense and special teams clicking, taking advantage of every opportunity we had,” Crisco said.

Shaver completed 4-of-9 passes for 138 yards and two touchdown passes to Junior Hill. One pass came after a snap went over Shaver’s head, but he retrieved the ball roll to his left and found Hill wide open behind the defense for a touchdown.

The other rushing touchdown from Shaver came on a fumbled snap on a field goal attempt. Shaver got the ball while not having a knee down and raced 20 yards for a touchdown in the third quarter.

Cam Smith rounded out the scoring with a 37-yard interception return for a touchdown for the Comets in the third quarter. The game went with a running clock for the last quarter and a half.

North Stanly will have to win the final two games of the season for the chance to get a wild card in the 2A West playoffs. The Comets travel to Mount Pleasant Friday. The Tigers beat Albemarle Friday night 42-0 to improve to 6-2 overall and 3-0 in the YVC.

“If we play like we’re supposed to play, I think we match up well,” Crisco said about next week’s game. Our defense against their offense would be a good game to watch.”