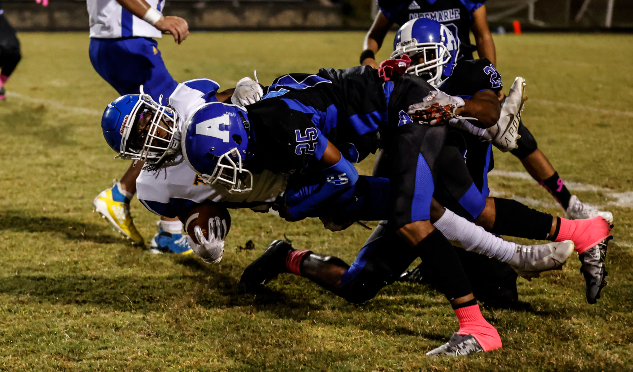 Playing this match-up for the first time since the 2012 season, the Tigers (6-2, 3-0 YVC) earned just the ninth win in 28 games against the Bulldogs with the shutout.

It was Albemarle’s fourth time being shutout this season, dropping the Bulldogs to 1-6 overall and 1-2 in conference play.

Mount got five rushing touchdowns from four players, finishing with 210 yards on 37 carries. Quarterback Lawson little rushed for a touchdown and went 6-of-12 through the air for 37 yards including a passing TD to Davis Neal.

The Tigers’ defense also picked off Albemarle four times in the game and recovered two fumbles.

Albemarle hosts Union Academy Friday night with the chance to earn the 1A playoff seed from the YVC with a victory.

The Colts saw a three-game win streak versus the Jackets end Friday night in a 31-16 road loss.

Friday’s defeat was the fourth in a row this season for West after opening the season with back-to-back wins.

West (2-4, 0-2 RRC) started the game well, recovering a fumble on Forest Hills’ opening drive. The Colts then drove down and Shane Mecimore scored from seven yards out to put the Colts up 7-0.

A 22-yard touchdown run tied the game minutes later, then the Jackets recovered a fumble and took the lead late in the opening quarter, 14-7, on a 12-yard quarterback bootleg.

Forest Hills led 21-7 in the second period before West answered. Jacob Lisk hauled in a Carson Morton pass for a 17-yard touchdown. The extra point was no good, leaving the Colts trailing 21-13.

Jaime Jaramillo added a 33-yard field goal in the closing seconds of the first half to pull West with five points, 21-16.

The Jackets kept West off the board in the second half while adding to the lead with a nine-yard touchdown and a 27-yard field goal, all coming in the third quarter.