Albemarle claims 1A football playoff bid from YYC with win 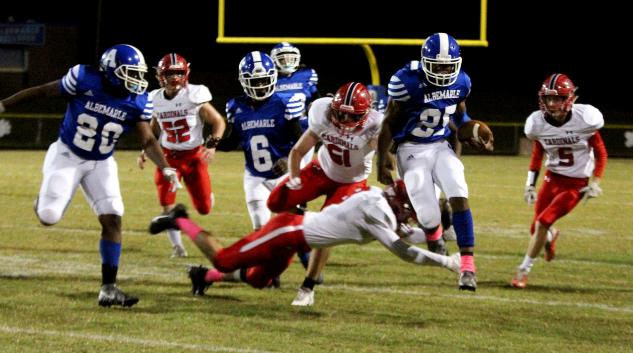 With the Yadkin Valley Conference split between three 2A and three 1A schools, the opportunity existed as the season opened for two teams to claim guaranteed playoff bids.

Entering Friday’s home game with Union Academy, Albemarle had the chance to be the best of the three 1A schools in the conference with a win.

The Bulldogs started fast and never trailed in the game, setting a season high in points scored with a 46-20 win over the Cardinals.

The win gives Albemarle wins over the other 1A schools in the YVC, which includes a 14-0 victory two weeks ago at South Stanly. The Bulldogs will qualify to play in the state playoffs with the win.

Friday’s victory also ended a two-game slide dating back to 2016 against Union Academy with the Bulldogs leading the overall series with the Cardinals 5-2.

C.J. Ellis got things going early for the Bulldogs (2-6, 2-2 YVC) with a leaping interception on a long pass. Several plays later, quarterback Ander Artis found Jaylen Pinkney for a 66-yard screen pass for a touchdown, putting the hosts up 8-0.

Albemarle led into the second quarter until Cardinals QB Patrick Miller found Seth Ballard behind the Albemarle defense in the middle of the field for a 90-yard touchdown pass. A two-point conversion tied the game 8-8.

The game was delayed in the second quarter for approximately 15-20 minutes when Vincent Gregory suffered a neck injury and was taken off the field by stretcher.

Pinkney added a rushing touchdown early in a second quarter, where the Bulldogs outscored the Cardinals 20-8. Yiterion Pergee added a TD on the ground. Pinkney then picked up a bad punt snap and returned it for a touchdown. The Bulldogs led at halftime 28-14.

The defense continued to set up Albemarle in the third quarter. Gerry Rivers intercepted a pass and returned it to the Cardinals 5-yard line, where T.J. Rushing scored to put Albemarle up 34-14.

Pergee added another rushing touchdown in the fourth quarter while Pinkney scored another defensive touchdown by forcing a fumble and returning it 25 yards for the score.

“We knew what we had to do tonight. We had to get a win,” Pinkney said about the Bulldogs’ approach going into the game. “We had to no matter what the records were.”

Pinkney said the Bulldogs “set the tone” for the game on defense.

Ellis said he and his teammates knew they “had to win this game to host a home playoff game.”

Starting fast in the game, Ellis added, was important.

“We’ve known for a long time that our team feeds off of that early energy,” he said. “It was very important for us tonight to come out early and set the tone.”

He said Pinkney’s efforts on offense and defense happen because the team has “the luxury to be able to move him around a little bit. He’s a great kid; he’s a smart kid. He can handle that.”

Turner also said Ellis “is an electric player,” adding the coaching staff every week looks for ways to get him involved.

“Good things happen to us when we get (Pinkney and Ellis) involved in it.”

Regarding winning the 1A side of the YVC, Turner said he was happy for the players.

“It’s been a tough (year) even going back to the COVID season last year, missing games and only getting to play three games,” Turner said.

While the overall record may not have turned out as they wanted, Turner said they can hang their hats on being the best 1A team in the conference.

The Bulldogs wrap up the regular season at North Stanly (4-4, 3-1 YVC). The Comets won on the road Friday at Mount Pleasant 21-18.