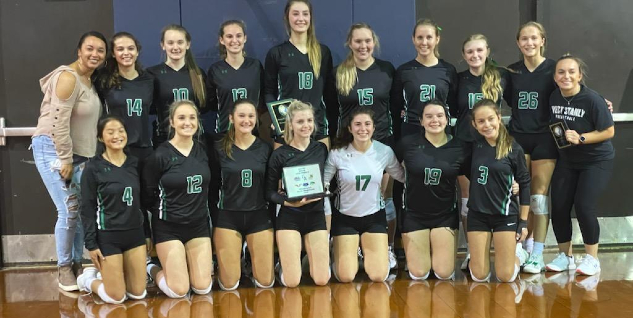 The fifth set of a high school volleyball match ordinarily has a winner when the first team reaches 15 points and has a two-point lead.

Rarely do extra points go 20 or above, but the volleyball teams of West Stanly and Polk County did just that in Tuesday’s 2A West Region second-round playoff match.

West, the No. 6 seed, hosted the No. 11 Wolverines in match lasting more than two hours Tuesday night. The Colts rallied to win the second and third sets, then outlasted the visitors in extra points in the final frame for a five-set win.

West entered the state playoffs Saturday having wrapped up a third straight Rocky River Conference regular-season and tournament title going undefeated in conference play. The Colts had advanced to the second round with a 3-0 sweep of Trinity.

The final set came down to a long rally with the Colts leading, 21-20. Junior Maycee Williams decided to dunk the ball over the net instead of setting another attack. The ball went over the front line and fell in between the Polk defenders for the game-winning kill.

“I just see it,” Williams said about when to tip the ball over. “I know when the ball is going back and forth they’re not going to expect a dunk, and that’s when to do it when everyone is tired.”

Head coach Steffi Dutton remarked about the youth of the team noting two three seniors start for West but two freshman play at outside hitter and middle blocker. Other players, she added, were playing their first varsity seasons this year.

“Those are big roles. It’s a lot of pressure,” Dutton said.

Dutton said she kept preaching focus to the team, saying the Colts “weren’t listening to the crowd…you could tell they were just so in tune with what was going on on the court.”

Polk County (11-14) jumped out to a fast start in the first set leading 8-2, but West rallied and eventually led, 23-19. The Wolverines outscored the Colts 8-2 the rest of the set to take an early lead.

West used a long run in the second set to even the match, ending on a Kayli Cleaver kill, and outlasted Polk County late in the third set to take a lead overall, 2-1.

The Wolverines responded going up 8-1 early in the fourth set, prompting an early West timeout. The Colts rallied to tie the set, 12-12 , but Polk was able to edge out West to force the fifth set.

In the final set, both teams went back and forth with neither leading by more than three points.  The Wolverines served for the win four times in extra points but could not get the final point.

Tuesday’s win, Williams said, “means we get to keep playing together and having fun…just fighting and learning to love each other through the good and the bad.”