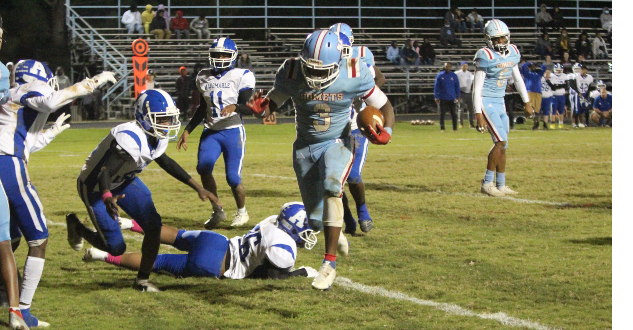 North Stanly running back Karee Dykes vaults over the goal line for the second of his two rushing touchdowns in Friday's home win over Albemarle. (Photo by Charles Curcio/staff)

The annual football rivalry between and Albemarle and North Stanly continued Friday night as the 54th chapter between the teams opened at R.N. Jeffery Stadium in New London.

As the recent trend continued, North took control of the game from the onset and posted the team’s eighth straight win over Albemarle, shutting out the Bulldogs 42-0.

The Comets took the lead on the first play from scrimmage when Luke Shaver found Clay Hatley across the middle for a 65-yard touchdown.

“I give credit to our offensive coordinator and our offensive coaches…they did a good job scripting what we were going to do,” Crisco said. “If the right situation comes, hit the middle early.”

Karee Dykes, who finished with 83 yards rushing, scored the first of two rushing touchdowns on the next North possession.

Dykes said North came into the game not underestimating the Bulldogs, playing hard from the beginning.

As far as his efforts on the ground leading North, he said he first “always try to get past the first level of lineman, get to the second level, and from there, green grass.”

Shaver later ran a bootleg into the end zone late in the first quarter and the Comets led after one, 21-0.

Dykes and Cam Smith each added rushing touchdowns in the second quarter, then Shaver threw his second TD pass of the night, this one to Stefan Harris. The game had a running clock for the second half.

Keeping the game balanced between the run and the pass was important, Crisco said.

“I thought we did a good job of mixing it up so well…trying to get outside and doing what we do best (which is) banging it up the middle,” the North coach added.

The shutout by North’s defense was the seventh time the Comets had shut out Albemarle (2-7, 2-3). It was also the third time in the current eight-game win streak North has had over the Bulldogs.

North’s defense, Crisco said, has been playing well the last three weeks. The Comets shut out the Bulldogs and South Stanly two weeks ago while allowing 18 points in a win at Mount Pleasant last week.

“It’s just a different level (on which) they have been playing,” Crisco said.

Albemarle qualified for the 1A playoffs as the No. 25 seed in the 1A West Region and will travel to No. 7 Mountain Heritage Friday night.

North Stanly did not qualify for the 2A playoffs. The Comets’ RPI (ratings percentage index) was 32 in the 2A West which would have gotten the team in. However, the No. 32-seeded team, Owen, received an automatic bid as the 2A champion in its split 1A/2A conference despite having a lower RPI than North. RPI considers a team’s winning percentage and its opponents in the season.