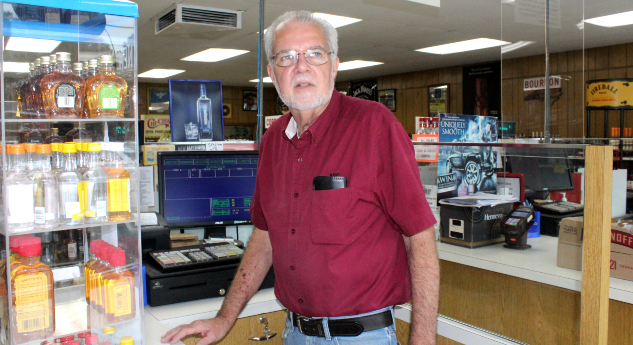 The walls lining the inside of the Norwood ABC store have sports memorabilia which have been there so long the sun has faded them.

Though he has not been there as long as the decorations, Lanny Whitley has spent 32 years doing just about everything needed in the store.

Having managed the store since 2006, Whitley, who retired at the end of October, said he stayed with the store out of obligation, adding he has not had a lot of help in the store. Many times when people have worked in the store, he added, they had other full-time jobs elsewhere.

Fortunately, however, he has not been sick very much, he indicated, saying, “if I’m sick today, I can’t call somebody in.”

Many days, he noted, he will be at the store on Main Street from “sun up to sun down.”

Whitley has done everything in the store from waiting on customers to washing the windows and keeping the restroom clean.

When he first started, Norwood had the only ABC store in the county. So on Fridays when first shift for the factories let out at 3 p.m., business picked up.

“People would be lined up to the back of the store on both sides. It was just constant,” Whitley said.

With other municipalities like Albemarle approving liquor and opening their own ABC stores, business dropped, he said. However, Whitley said business picked back up in the time of the COVID-19 pandemic.

He noted many stores limited their store hours, but Norwood continued to stay open later and got business during those hours.

Many customers, Whitley said, are known to him by sight and have been frequenting the store since he started working years ago.

The secret to making the store a success, he added, was to treat customers like they are somebody.

“Don’t just treat them like a number to get them in, get their dollar and get them out,” Whitley said.

He noted many customers from Albemarle still make the drive out to Norwood because he talks to them.

Having a variety of spirits in stock is important as well, Whitley said. When he took over as manager, the only flavored vodka the store had was Absolut Citron. Now, the store carries various flavored vodka.

While he does not have as much room on the sales floor, Whitley said he tries to have what people want on hand. However, he added, he waits until 10 or 12 people request a certain brand or type before stocking up on it.

As far as plans for retirement, Whitley said he did not have any.