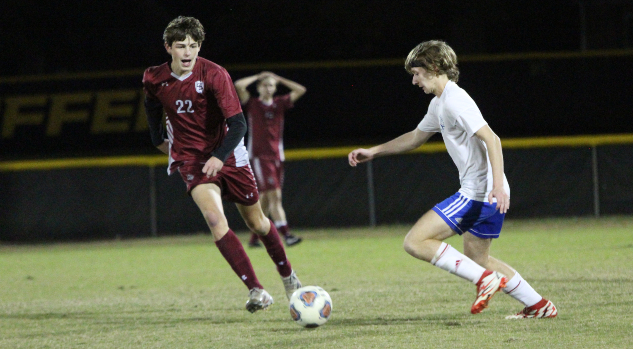 The Knights hosted the Highland Tech Rams, whom Gray Stone had last met on the field in 2019, when the Knights won a 3-0 decision in the opening round of the playoffs.

This time, the No. 4 seeded Knights grabbed an early lead and never trailed in a 4-2 win over the No. 5 Rams.

Gray Stone (18-4) got three of its tallies from underclassmen, including two from sophomore Desmond Bullard and one from A.J. Cotoni. A junior, Dylan Todd, added a critical score early in the second half.

The win puts the Knights into the fourth round, or the Elite Eight, of the 1A playoffs for the first time since 2018, when Gray Stone lost in penalty kicks to Polk County. The Knights have never reached the fifth, or regional, round of the playoffs.

Both of the Knigths’ first-half goals came off of corner kicks, the first coming in the 15th minute. A deflection off the kick found its way to Bullard.

“I just saw the defender run in front of me and (the ball) bounced between the defender’s legs,” Bullard said. “I decided to put it top shelf. I think it took a little deflection, but a goal’s a goal.”

Bullard assisted the next goal 10 minutes later deflecting the ball to Cotoni, who scored to put the Knights up by two goals.

With two minutes left in the first half, Gray Stone was called for a handball in the Knights’ penalty area. Highland Tech senior Ryan Willman scored on the penalty kick to cut Gray Stone’s lead in half.

Early in the second half, a free kick by Todd deflected off of a Highland defender and found its way into the back of the net, restoring Gray Stone’s two goal advantage in the 45th minute.

Another long free kick eight minutes later led to the Knights’ final goal of the match. Willman was whistled for a foul and given a yellow card. On the ensuing free kick, the ball again found its way to Bullard, who scored.

Williman added a goal for the Rams with 3:44 left in regulation for the game’s final score.

“A fast start and early goals are always big,” Knights head coach Brad Harrington said. He mentioned the previous match versus Elkin where the Knights scored in the first 30 seconds as being important.

“Those two goals early were huge.”

Harrington said the Rams were well organized offensively and strung passes together well, which is the way the Knights like to play.

“So we had to be a little bit more patient offensively.”

Gray Stone will travel to Huntersville to face the Christ the King Catholic Crusaders 6 p.m. Wednesday. The No. 1 seeded Crusaders (19-1) advanced to the fourth round with a 6-0 home win over Swain County.

The Knights opened the regular season on the road with a 3-0 loss to Christ The King, which Harrington said is “a really good team. They beat us for a reason the first time. I told the guys, ‘We can’t ask for anything better. You get a rematch potentially to go to the Final Four for the first time in (the program’s) history.”

Being a younger team, with 10 sophomores on a 17-man roster, this season’s playoff run has been thrilling, Bullard said.

However, he added, “right now, we’re just focused on winning the next game to try and win a state championship.”