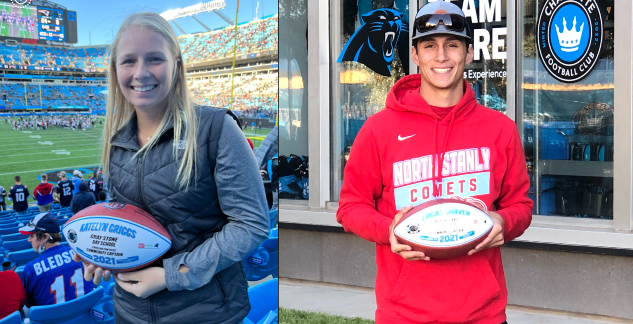 At halftime of last Sunday’s Carolina Panthers NFL game, 10 student-athletes from North and South Carolina were named Community Captains. Two of the nominees were from Stanly County.

Gray Stone’s Katelyn Griggs and North Stanly’s Luke Shaver were both honored during the ceremony, which recognized students for their accomplishments on the field and courts along with their respective classrooms and communities.

The athletic programs of Gray Stone and North Stanly, along with the other winners, each received a $500 contribution from the Panthers.

Griggs recently won this season’s 1A women’s golf individual state championship for the Knights, earning the school’s first state title in the sport.

The senior has a 4.0 GPA and is a member of National Honor Society, while also helping to run junior golf clinics in the community. Griggs has also worked as a mentor for Gray Stone’s middle school program.

A 4.64 GPA student ranked first in the 155 students in the class of 2022, Shaver completed 33 credits of work in the dual enrollment program at Stanly Community College. The senior is a member of Fellowship of Christian Athletes, the National Honor Society and the National Technical Honor Society.

He also is a member of New Mt. Tabor United Methodist Church and involved in the church’s youth group. Shaver has taken part in service projects including Operation Christmas Child, Community Coalition for Christ Thanksgiving and Christmas Service Projects, along with assisting with collecting donations for the Pregnancy Resource Center. He also has worked at the North Stanly High School youth baseball camp for two seasons and he led a sock drive in 2020 to benefit homeless people in Stanly.

The 10 winners of the awards, along with Griggs and Shaver, included the following athletes: