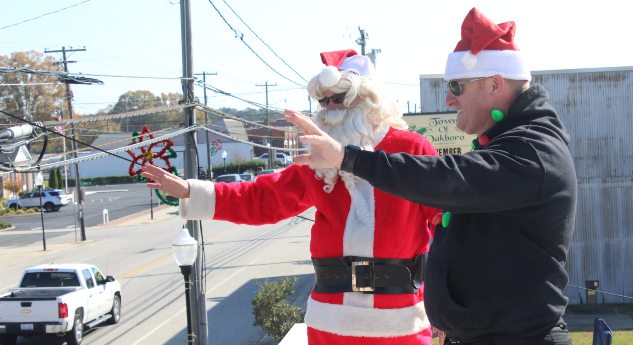 Oakboro Police Chief T.J. Smith (right) and Santa Claus climbed onto the roof of Butch's Auto Parts to raise funds and toys for the Toys for Tots drive. (Photo by Charles Curcio/staff)

For the fourth straight year, Main Street in Oakboro was filled with the sounds of honking horns and drivers waving to two members of Stanly’s law enforcement community.

The Toys for Tots Program, operated by the Marine Corps League, looked to better their numbers of last year when the program distributed a total of 6,366 toys to 1,676 kids.

According to Debbie Pressley, coordinator of the Stanly Toys for Tots group, Wednesday’s event raised $6,072.44, 530 toys, 27 books and 52 bicycles, including one family which donated 40 bikes.

The group will continue to collect toys for distribution well into the holiday season, and still needs donations of batteries of various sizes for the toys.

Smith said the first time he spoke with Toys for Tots and Oakboro Police Lt. Mark Shue about the drive, he wanted to figure out a way to “really get people to participate.”

Previously, Toys for Tots put out boxes throughout the county but they were not getting a lot of toys, the chief explained.

“So I said, ‘Let’s do something that would bring people back to us.’ So we decided (for me) to stay on top of a roof until we filled up a truck or trailer,” Smith said.

He said the only way he would be involved with the drive is if the toys all go to children in Stanly County, which they do.

According to Smith, West Stanly Christian Ministries and Stanly Community Christian Ministry have developed a system to organize the distribution of toys to as many families as possible with no one taking advantage of the system and getting more than their fair share.

“There are many underprivileged families in this county and I’m just very happy we have a community that wants to help,” Smith said. ‘These kids are opening brand-new toys…and that’s the way it’s supposed to be (for these kids) to have a normal Christmas.”

Pressley said working with Smith, Crisco, law enforcement and the community coming together to help itself “makes the program work, period.”