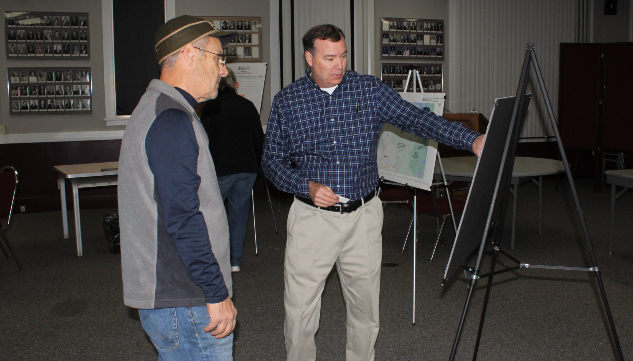 Badin town officials hosted a meeting with the public at the Alcoa Conference Center Saturday morning regarding plans for a new park.

The meeting featured plans for a new park behind the town hall. The area runs up to the boat ramp area.

Using the 14-acre parcel of land, Benesch, an engineering consulting firm from Charlotte, designed plans for the park.

Jeff Ashbaugh of Benesch said his firm “likes to do our homework on the park site so that we have an understanding of what can fit here.”

Ashbaugh said knowing where water, sewer and power lines are for a park is important for the plan to be practical. He noted access points to the park would give visitors access to the Badin downtown area, including restaurants and the museum complex.

With Badin Lake in the background, the preliminary plans for a new park capture the view of the lake with a trail loop and several picnic shelters. A large green space inside the loop could be used for events or just for kicking a soccer ball around, he added.

Lights, which the town already owns, may be put up in the park as well, which Ashbaugh said would “speak to the character and somehow incorporate that flavor.”

The plan also takes advantage of the parking lot which currently exists and is owned by Cube Hydro as well as the boat ramp.

Nearly 40 citizens gave feedback on what they would like the new park to have. Some of the more popular choices included a bandshell/stage or amphitheater-type area, a marina, a playground area and a trail.

Badin Mayor Anne Harwood said she was familiar with the process of designing a park, noting the town did something similar around a decade ago. Both plans were similar, she added, but the one presented Saturday had some new aspects.

Harwood said the town would apply for a state parks and recreation grant to help offset the cost of the park.

Town Manager Jay Almond said current planning was funded by a grant from ALCOA and will be completed by April. Funding for the project, he added, will come in multiple phases from the North Carolina Parks and Recreation Fund Trust along with budgeted state allocations.

“We’re excited and looking forward to having (a park) be really for the community of Badin and the region,” Harwood said.

Almond said the public input meeting “went exceedingly well.” He added public participation “is critical to enhancement planning. Being all things to all people is (being) hyper optimistic, but public input definitely informs decision making and facilitates the highest and best uses.”

New connections to Morrow Mountain State Park made possible through funding from the state will also help more citizens to access Badin and the new town park. The park, Almond said, could share borders with Badin Lake, historic Badin, Falls Reservoir and the Uwharrie National Forest.