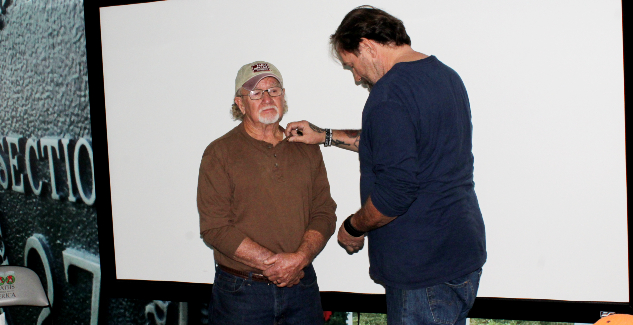 A nationwide tour honoring veterans of America’s armed forces both alive and deceased made a stop Sunday afternoon in New London.

Wreaths Across America, a nonprofit organization which places wreaths on the headstones of veterans and honors those who served, brought its mobile trailer display to town.

The tour stopped at the Fiberon recycling plant on U.S. Highway 52, allowing people to learn more about the organization as well as raise funds and awareness for it.

Brandon Tucker, the local WAA coordinator and production supervisor at Fiberson, said Richfield Park will host a ceremony at 12 p.m. Dec. 18 before wreaths are laid on graves at cemeteries in Richfield and New London.

“If there is a veteran’s grave out there, we want to be able to honor, teach (others) and remember those veterans,” Tucker said.

Plant manager Chris Jack said the event was to honor “veterans and their families” and to “just be able to say here’s a place where you can come and fellowship together. It’s another way for us to (have an) outreach in Stanly County.”

As part of the event, a traveling museum trailer explained the goals of Wreaths Across America, which Stefan Brann, the driver of the exhibit, said is based in the small town of Columbia Falls, Maine.

According to Brann, the mission statement for WAA is three words: remember, honor and teach.

The organization was founded in 1992, when Morrill Worcester, owner of a wreath company in Maine, had 5,000 extra wreaths that year. With the help of Maine Sen. Olympia Snowe, he donated the wreaths to Arlington National Cemetery, where they were placed on soldiers’ graves.

With volunteers helping, the group quietly placed wreaths at Arlington until 2005, when a picture went viral online of the wreaths. Thousands of people requested to take part, and the demand for wreaths outside Arlington grew. The organization founded a 501(c)(3) nonprofit in 2007, and has grown in the number of wreaths placed. In 2019, the group placed 2.2 million wreaths in 2,150 different locations, including Luxembourg and the Netherlands.

Brann said people become emotional after visiting the trailer and watching a short film on the group with “tears of joy and tears of sadness.” He said he and WAA ambassador Jennifer Merrill love their jobs with the traveling exhibit.

“We get to interact with veterans every day from World War II to Afghanistan…we bring different communities together,” Brann said. “Those men and women that served went through things people just don’t understand. So if we can get together and share those stories, it gives people a better understanding of how important their service is to this country.”

As part of Sunday’s event, Vietnam veteran Jay Fesperman of New London was honored by Brann with a commemorative lapel pin as part of a proclamation signed by President Barack Obama in 2012 and continued by President Donald Trump five years later. Fesperman also received a challenge coin with the Vietnam Memorial on it and a copy of Trump’s proclamation.