Earl Almond has been selling Christmas trees on his family's farm since 2016.

When it comes to securing a quality Christmas tree for the holiday season, one of the go-to places for many is Almond Christmas Tree Farm in Albemarle.

Having been around since roughly 1920, the 98-acre farm focused on beef cattle and various crops for many years until Earl Almond, whose grandfather first acquired the property, pivoted about a decade ago towards Christmas trees, which he plants on about five acres.

“I wanted something different that was not in the county and Christmas trees was it,” said the Millingport native, who owns the property with his five siblings.

He first started working on the farm in 2005, shortly after his father died. Before his time on the farm, Almond, 63, and two of his brothers had a lengthy career with NASCAR, where they built engines for several drivers, including Dale Earnhardt.

The only other farm that sold Christmas trees in the county was Grovestone Christmas Tree Farm. Almond approached the owner to make sure he would not be interfering in its operations before he began planting his own trees.

As someone who knew little about the art of growing the trees, Almond first contacted North Carolina State University’s College of Agriculture and Life Sciences, which put him in touch with Eastern North Carolina Tree Growers Association. After learning more about the craft, Almond started growing his own trees in 2010 and began selling them in 2016.

Almond was initially not sure if he could be successful selling trees, since it was something that was still so new to him.

“The first couple of years, I was scared we wouldn’t sell all of our trees, but we did,” he said.

Gradually, the number of people who came out to the farm to purchase trees increased as word spread about the business.

He sells all kinds of home-grown trees, including Carolina Sapphire, which is usually the most popular, Leyland Cypress, White Pine, Virginia Pine and Green Giant. Prices typically range from $50 to $105, depending on size. Price includes cut, stand fitting, cleaning of the tree and wrapping it up so it is ready to travel.

Each year, he plants 300 trees, usually in January and February, which take around five years to grow. He also usually brings in between 150 to 200 pre-cut Fraser firs from the mountains, though this year, due to supply issues, Almond was able to procure less than 100.

Even though he could plant more, for Almond, the key is quality as opposed to quantity.

“Every tree is sheared and maintained like it’s going to be in my living room,” he said, though ironically he and his wife put up an artificial tree each year. 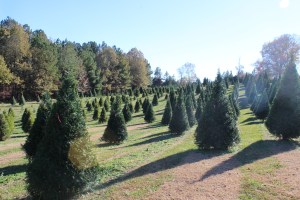 Earl Almond plants about 300 trees each year. He usually has about 1,500 trees in the ground before the Christmas season.

Customers often come to the farm the first Saturday in November to pre-tag and reserve their favorite trees. About half the trees were pre-tagged this year, compared to a fourth that were pre-tagged last year. Beginning every Black Friday, people flock to the farm to officially pick up the trees, which signifies for many the start of the Christmas season.

Last year, Almond sold about 450 trees in a span of five days, a record up to that point. But this season, with many people worried about shortages of many crucial items, including Christmas trees, due to supply chain issues, he sold almost all of his inventory — about 400 trees, including the Fraser firs — in only three days, the majority of which were sold Friday. The only trees that are still available are ones that have already been reserved.

“People were sitting out in our parking lot at 8 a.m. waiting” until he opened at 9, Almond said Monday morning. “Friday was unreal.”

He spoke with several other owners of similar-sized tree farms in nearby counties and many of them also sold out within a few days. Almond estimates such a large number of people came out so early because they were afraid if they waited, “they would not be able to get a tree.”

Customers with young children also enjoyed interacting with Buzz, a donkey named by his grandson after Buzz Lightyear from the “Toy Story” film series, who’s been a mainstay on the farm over the last several years, along with Santa and Mrs. Claus, who often make an appearance. 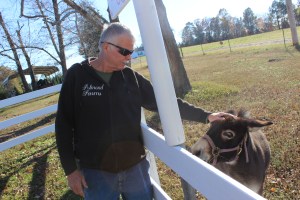 Earl Almond with his donkey Buzz.

Though he appreciated that so many people came out to purchase his trees, he did wish more customers took the time to buy other items that were being sold such as his award-winning barbecue sauces, under the Big E’s Smokehouse label, and homemade elderberry syrup, jelly and jams.

“People were in a rush to pay for their stuff…and so they didn’t really buy as much product that we make,” he said. “So it really hurt us as far as our gift shop sales.” To try and compensate, the gift shop will be open Saturday from around 9 a.m. to 3 p.m.

And most of the customers this year came from other areas, especially in and around Charlotte — a common theme since he first opened. Almond estimates that about 60 percent of his customers have been from out of county, something he’d like to see change in the future.

“I really want local people to come out to our tree farm,” he said.

Ultimately, the best part of the job for Almond is being around the people and the relationships that he’s been able to forge.

“I like seeing the families come out,” he said. “The small kids, they just love it.”