Friends remember Bill Turner, who worked 55 years at The SNAP

Newspaper people often say that once a person gets the ink in their blood, it is hard to get it out.

That statement has never been more true than with the story of Bill Turner, who died Saturday night at the age of 84.

Bill worked for The Stanly News & Press for more than 55 years, more than 31 of that as production manager. 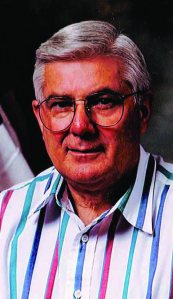 Bill Turner worked for The Stanly News & Press full-time for more than 50 years.

He became interested in the newspaper industry at a young age. After selling and delivering papers for many years, he landed a part-time job at The Charlotte News upon completion of high school.

Although he was in training to be a salesperson, he didn’t like the way his career was going. As fate had it, a position in the pressroom came open at his home county newspaper, The Stanly News & Press.

He married his wife Sylvia on a Saturday and began work at the SNAP, his first full-time job, on a Monday — Labor Day 1955.

After learning the ins and outs of the pressroom and commercial printing aspects of the newspaper, he was promoted to production manager in 1974.

Dale Smith worked with Bill for 27 years in various roles within the circulation department.

“I saw a number of publishers come and go, but the one constant mainstay was Bill Turner from Big Lick,” Smith said. “He was a true gentleman, always kind, fair and a man I trusted. His friendship was a blessing and everybody loved ‘Billy Willie.’

“Bill Turner was the heart and soul of the SNAP.”

Speaking upon his retirement in March 2006, Bill compared it to a student awaiting graduation; while a student eagerly anticipates the day, it does become emotional.

“I’m going to miss this place bad,” he said. “I’ve made a lot of friends through the newspaper. The people I’ve worked with have always been like family.”

So it should come as no surprise that Bill would rejoin the SNAP part-time and work around five years more.

When he rejoined the company he was working for newly-hired publisher Sandy Selvy.

During this stint he served as a fix-it man, paper deliverer and overall ambassador and historian of The SNAP.

“His knowledge of everything Stanly News and Press was very impressive, but his loyalty to the paper and the staff was even more impressive,” said Selvy-Mullis, who is now president and CEO of the Stanly County Chamber of Commerce. “He would help with anything and would know the answer to most any question you would ask.

“Obviously Bill was a great asset at work, but on a personal note, he was a blessing to me,” she added. “Moving to a new community without any friends or family can be difficult, but Bill did everything possible to help me learn about the community and fit in. He and his wife Sylvia welcomed me and treated me like family and I will never forget the kindness.”

In a September 2005 interview with lifestyles editor Jo Anne Efird, Bill said if he had the chance to start over, he wouldn’t change a thing.

“I have been blessed with everything I’ve ever needed, and much more,” he said. “I have been fortunate to work with a lot of good people and have a wonderful family.”

Bill and Sylvia, his wife of 66 years who survives, raised their family of three children near Oakboro. They supported West Stanly High School activities, served in their church, Big Lick Baptist, and enjoyed spending time with their grandchildren. He loved the beach and lighthouses and photographing old tobacco barns.

For many people, including his colleagues, Bill will be remembered most for his contributions to helping record the county’s history through The SNAP.

“I was told by a wise man early in my career that once you get printer’s ink in your blood, you can never get it out,” Bill said in that 2005 interview. “I believe God places us in a particular place for a purpose and I just hope I haven’t disappointed Him.”