BJ DRYE COLUMN: Thanks, Bill, for everything

Bill Turner is partially responsible for me being at The Stanly News & Press. 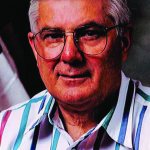 Bill Turner worked for The Stanly News & Press full-time for more than 50 years.

When I wrote in inquiring about writing positions around June 1998, I sent a letter to Bill. He was the production manager.

I didn’t know there was another level of publisher who ultimately made the decisions.

Somehow my letter ended up on the editor’s desk and I became a sports stringer, which is ironic since I have no athletic ability other than being a fan.

But as luck would have it, throughout my SNAP journey Bill became one of my two closest friends at work.

In the beginning, I made it a point to soak up as much information as I could, and not just on the writing side.

Whenever I had a free moment as a stringer and then as a part-time employee, I found my way to circulation, advertising, the pressroom and composing, where Bill was located.

I watched him slice copy with a box cutter, wax it and paste it onto layout pages.

He was one of the last links from the old days of linotype, into the days of paste-up and the present days of computers.

I always have had an interest in history and older things, and Bill loved to share the history of The SNAP.

I usually stayed away from my work family after work, but for some reason Bill became my work grandpa or father.

A stream of memories came back this week as I heard the news of his passing last Saturday at age 84.

I remember riding with him to the Christmas party at The Rosebriar. There were the steak biscuits with Bill and Richard at Bojangles.

When I rode in the Oakboro Christmas Parade in the Mayberry car, mom, Bill and his granddaughter Madison rode in our Smart car.

He served as basically an interim publisher on at least one occasion. It would have been fitting for him to actually have the role prior to retiring, but things have a way of working out in the end.

He was such a wise man in my most trying times, but I’ll save those stories for my autobiography.

It was a sad day when he retired in 2005, but he could not stay away and returned later in a part-time capacity for five or six years.

Everyone knew Bill and I just wish I had made it a priority to record some of his stories of his early years of The SNAP and the glory days of Fred T. Morgan, George Weaver and Hawkeye Ivey.

But it doesn’t stop there. I’d love to hear more stories of lighthouses, see his photographs of old tobacco barns and enjoy some Whispering Pines or Log Cabin barbecue with him.

Because of COVID, and both his family and mine taking it seriously, I had not seen him in a few years. I did talk to him back in the spring and talk of the newspaper was still a daily routine. I told him I was trying my best to keep his life’s work moving ahead.

In a time when the media is often attacked for being biased, Bill understood that a community needs community journalism as well as contributors. It needs the occasional fishing photo, the most unusual looking vegetable of the season and the updates of community correspondents, in addition to the regular news provided.

For even though he is no longer with us, I can’t see Bill not staying busy and lending a hand to those in need.