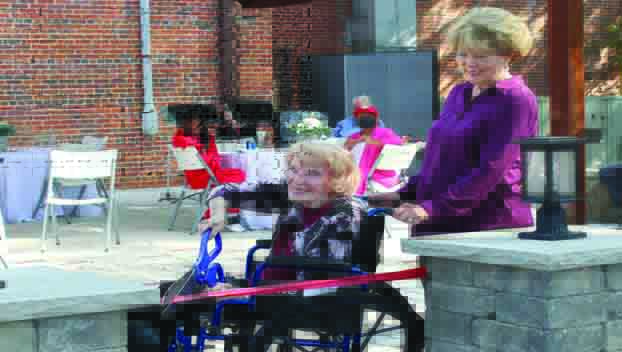 The Stanly County Senior Services recently dedicated its new patio space behind the senior center to a former director.

The new outdoor space has a plaque naming it “Becky’s Backyard” in honor of Becky Weemhoff, who worked in the senior services department for 31 years. Weemhoff was in attendance along with Jean Rabe, whom along with her family and the Friends of the Senior Center donated the money making the renovations possible.

A new covered area with tables and chairs will allow outdoor programs, along with a small art garden.

Craig Reich, president of the board of directors for the Friends of the Center, said four years ago the board looked at the condition of the back part of the building, which at the time “wasn’t a pretty sight.”

The board started the process of transforming the patio into a multipurpose area, he said, around 2.5 years ago when the concrete patio was built through donations and money raised by the Friends.

In the second phase, a giant sunscreen was put up, which Reich said “provides a nice atmosphere on the patio.”

The third phase was the landscaping, both in the patio area and the front of the center.

“Through Becky’s conversation, with Jean Rabe and her wonderful contribution here, we were able to complete what you see in front of you,” Reich said.

A friendship brick program allowed contributors to honor and memorialize friends and family on the patio surface.

Plans also exist for a fourth phase of renovations to improve the front of the center.

“There’s a lot of activities we’ve always had to do inside, like exercise classes, games and other classes, that on nice days like today you can come out and enjoy more,” Reich said.

“I can’t tell you how deeply touched I am,” Weemhoff said about the new area being named after her.

The Rabe Family was also honored with a plaque honoring the family’s contribution to the new patio. The center also has the Rabe Room, dedicated to the family for its contributions.

While redoing the Rabe Room is one thing, Rabe said, the patio to her “was much more wonderful. This is just something everybody can enjoy.”