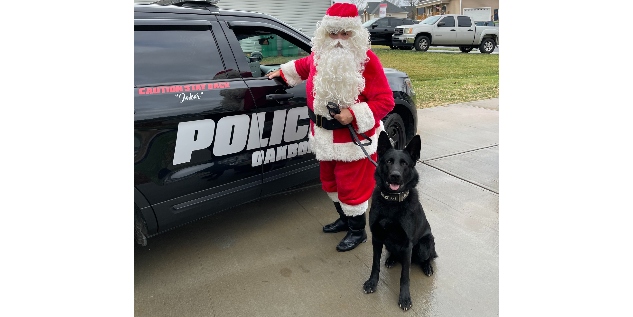 What started as a police K9 photo contest for a nonprofit organization turned into a huge fundraising drive for one local police department and needy kids in Stanly.

Joker, an Oakboro K9 police officer, finished second in an online contest hosted by Blue Line Unlimited, a national nonprofit which supports first responders and law enforcement officers. He won $250 from Blue Line, but it turned out to be just the beginning. As of Monday, contributions from local citizens and businesses totaled $6,920.

Of that total, $500 will go into the Oakboro K9 fund and the remaining $6,420 will be donated to Stanly County Toys for Tots.

Joker finished with 16,624 votes, second to the winner, Recon from the police department in Brimfield, Ohio, who finished with 18,102 votes. Brimfield is a larger town, with about 15,000 residents, compared to Oakboro’s 1,959.

According to Oakboro Sgt. Jason Eschert, after submitting Oakboro and Joker in the contest, interest took off when early on the local K9 was in eighth place.

“We started going back and forth,” Eschert said about Joker and Recon exchanging first and second place multiple times. “The competition was exciting. There’s so much negativity in the world, to have something so lighthearted and positive turn into what it turned into was the best.”

The Oakboro officer said had it been himself and not Joker in a contest, it would not have happened.

Plans were to donate the prize money from the contest to Toys for Tots, but then donations started pouring in with many matching the other $250 which Joker would have received had he won the contest. Lifters Gym in Albemarle, Eschert noted, was the first to match the $250 difference in first and second place.

After that, many contributions of $100 and $200 came in, and the numbers grew quickly.

“It’s the giving spirit of the community,” Eschert said. “I’ve got a heart for kids. I’ve got four myself…anything I can do to make life better for a child brings warmth to my heart.”

Blue Line Unlimited actually created a second place in order to give $250 to Oakboro, which Eschert said brought tears to his eyes.

“We didn’t win, but I think in the end, not only did we win the heart of the community but the heart of Blue Line Unlimited.”