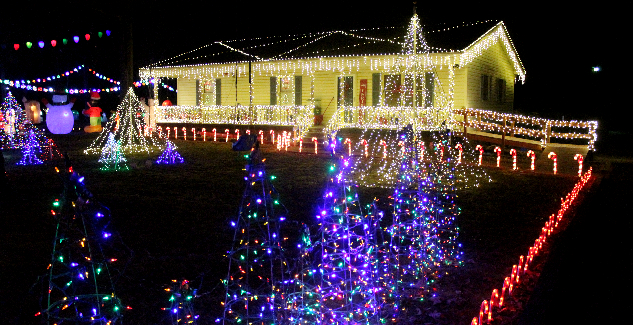 The Poteat family house lights up the night sky in the Eastwood Park community. (Photo by Charles Curcio/staff)

The tradition of Christmas lights dates back to the 18th century when candles adorned trees. Modern electric Christmas lights go back as far as 1895 when U.S. President Grover Cleveland was the first to have electric lights on a tree.

One Albemarle family celebrates their loved ones with a display of lights and inflatables bright enough to see all over the neighborhood.

At the corner of Catalina and Milton streets, the Poteat family goes all out with Christmas decorations, including more than 50 inflatables and lights synchronized with music.

Scott Poteat said the display stems from a family tradition when the family would visit his father for Thanksgiving. His father lived in Albemarle for many years and worked for Jefferies Southern Processors before retiring to Patrick, South Carolina.

Wanting to put up a “small” display of his own when his dad passed at Christmas, Poteat said, he asked his wife if he could do it.

“She said we could do a small display.”

Poteat ended up going to “every Lowe’s in North Carolina” to find items on clearance after the Christmas his father died. He started his display with about 10 blowups and 8,000 to 9,000 lights.

The family now has 40,000 lights on the Catalina Drive side and the blow up decorations with space between them. He also put the lights on hooks instead of using string.

Visitors can listen to a small radio on the porch playing Christmas music, or tune their car radios to 97.5 FM to hear the songs while four Christmas trees made of lights sing the songs.

However, his granddaughter, who turns two next month, chose her favorite song to start the show, the non-Christmas song “Baby Shark.”

“She walked about singing it. If you come to my house and hear ‘Baby Shark,’ you know you’re at the very beginning,” Poteat said.

Working 14-hour days driving a truck for Trexler Trucking, he started putting up the displays the second week of September.

“We do it truly just because we like to hear the kids get excited. It was my father’s favorite time of the year…by me putting up lights, I’m honoring my father,” Poteat said.

A string of red lights in the shape of a heart hangs on a tree to honor his father’s memory. Another heart has the letters J and S in it, honoring Jaylynn and Sandy Wilson, fellow members of North Albemarle Baptist Church, whose father died in a fire in Badin the day after Christmas. 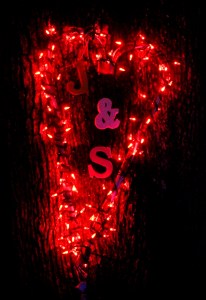 A heart honors the loss of the father of Jaylynn and Sandy Wilson. (Photo by Charles Curcio/staff) 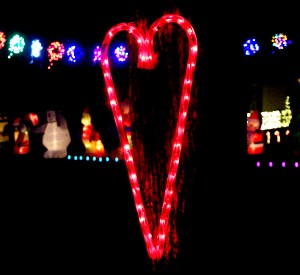 Even with contributions of neighbors of more inflatables and lights, Poteat said he still does not think it’s a big display.

“We encourage anybody to pull into the drive, off the road, get out and walk, take pictures, do whatever you want,” Poteat said.

Some people, Poteat said, can recall where every inflatable was located the year before and tell the family when they are in a different place. The family encourages visitors to walk among the inflatables, because that’s how it was with his father’s display.

Poteat’s wife, Kristi, he said, tells him she does not like the display, but he said he believes she secretly does.

Offseason, the gear gets put away in a storage building.

“We probably have 10,000 boxes of lights at the house just to replace lights which go out,” Poteat said.

The building also has 28 backup inflatables “in case we have a blowup go out…we can’t have an empty spot.”

Through the holidays the blowups will go on at 4:30 p.m. and the lights go on at 5 at the Poteat residence on 2209 Milton Dr.