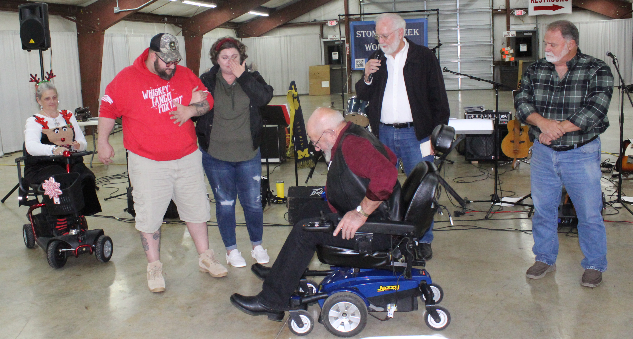 Soldiers, when coming back from having served active duty in combat areas, often suffer from health issues, which sometimes may go undiagnosed.

One Stanfield family with a returning soldier suffering from issues related to his duty got an early Christmas blessing from American Legion Post 76.

At the Post’s recent Christmas party, Jacob Brown, his wife Cassie and their two children got a surprise from the Legionnaires. Jacob, who returned recently from an active tour of duty in Afghanistan, transferred into the Legion post from the Veterans of Foreign Wars.

Along with some landscaping at their new house constructed by Habitat for Humanity three years ago, the Post arranged for Brown to have a new scooter and lift to allow him mobility when the family goes shopping and other places.

Brown has problems with his balance and stability, needing help from his wife and family to get around, including exercise like walking down the driveway.

His condition has not been diagnosed yet, according to post commander Bill O’Neal, who said getting a scooter through channels like the Department of Veterans Affairs is difficult.

Angie Adamo, a member of the Ladies’ Auxiliary of the Post, helped to get the scooter by calling around to find someone who could donate one. The search eventually led to Rick Kilvurn, a 100 percent disabled, Purple Heart, Bronze Star-winning veteran living in Rockwell who worked on scooters.

Kilvurn had three scooters and told O’Neal to pick out one, but he eventually gave the Post two for Jacob to choose between. The other scooter will stay with the Post for use for legionnaires needing help to get around at meetings.

O’Neal said the scooters were a double blessing both for the Brown family and the Post.

After the Post celebrated Christmas with a meal at the party, O’Neal, Adamo and others called the Brown family up and surprised them with the new scooters.

Cassie said it meant so much “for him to have his independence and be able to do more for himself” in receiving the present of a new scooter. She said the past five years “have been hell on Earth.”

“We don’t know what’s wrong with him, but just seeing him smile having the dignity he wants and deserves, it’s just more than words,” she said. “It’s been a challenge all the time to get and keep his spirits up.”

Jacob was all smiles as he drove his new scooter around the Christmas party at the main building of the Stanly County Fairgrounds. 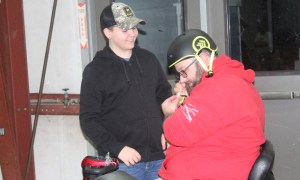 Kaleb Brown, left, and his father, Jacob, are all smiles after the son put a new helmet on his father’s head during the Christmas party. (Photo by Charles Curcio/staff)

When he received the scooter, Jacob struggled to speak into the microphone, but spoke volumes with his brief words.