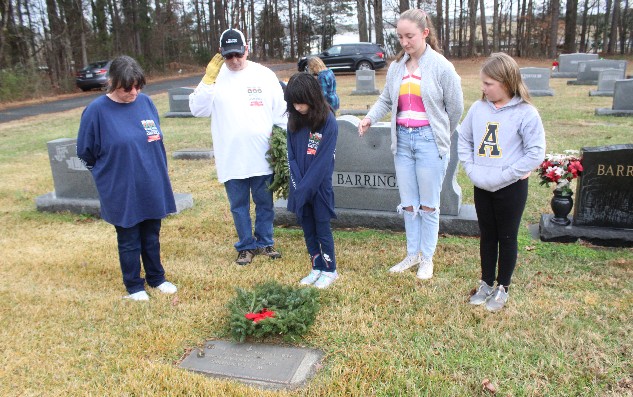 Veterans and their families gathered recently at Richfield Park and across the country to honor loved ones and more for National Wreaths Across America Day.

A total of 3,136 locations took part in laying more than 525 truckloads of wreaths on the graves of soldiers across the country. At Arlington National Cemetery alone, more than 250,000 wreaths were laid out by approximately 38,000 volunteers.

At Richfield Park, wreaths were laid in front of flags representing the five branches of the military and a Prisoner of War/Missing In Action (POW/MIA) flag honoring those soldiers.

Brandon Tucker from Fiberon, who serves as a local representative for WAA, spoke at the Richfield ceremony before volunteers went to lay wreaths.

“We are proud to be Americans to live in a free society made up of many people, many races and many walks of life. The freedoms we enjoy today didn’t come without a price,” Tucker said. “This nation stands as a shining beacon of liberty and freedom for the world.”

Regarding the POW/MIA soldiers, Tucker said, “These individuals have never returned to their families or their homes, but they will not be forgotten.”

Members of the Highland Choir sang “The Star-Spangled Banner” and “God Bless America” during the ceremony.

After the ceremony at the park, approximately 50 volunteers placed 460 wreaths across the county on soldiers’ graves.