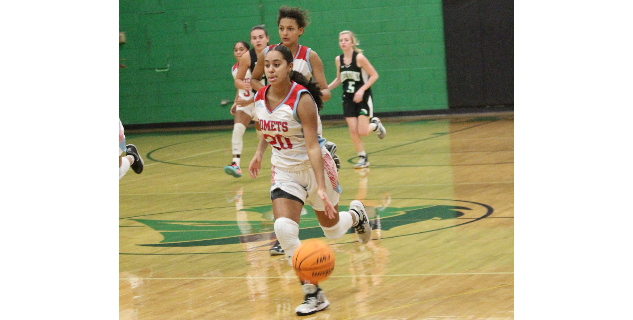 North Stanly's Lexi Goode led the Comets with 21 points in Monday's win over West Stanly in the opening round of the Colts' holiday tournament. (Photo by Charles Curcio/staff)

The Colts hosted the Pirates and Panthers along with Albemarle, Gray Stone and West Stanly Monday.

A big opening run to start the game led the Comets to keep its active win streak alive to seven with a 21-point win over the Colts.

The Comets’ pressure defense kept the Colts (1-9) from scoring from the field as West made just four baskets in the first half.

In the first quarter, North opened up with a 12-0 over the first 3:30 of the period and never trailed, leading by double digits the rest of the way.

North Stanly (7-1) was led by senior guard Lexi Goode who score 21 points including 14 in the first half helping the Comets to lead at halftime, 34-12. Gia Dunlap and Shalyn Bell each added seven points for North.

West was led by freshman Grayson Howell who scored eight points off the bench, all coming in the fourth quarter. West outscored North in the final period, 15-5.

Goode said conditioning has been important early in the season from the Comets’ new head coach, Regan Allen.

“We’ve been running and running. I think we’re pretty much ready for what the season has to come,” Goode said.

Having size down low in players like Bell and Paris Bennett has helped the senior adjust her game, she said.

“In the past, we haven’t had that type of height. It helps a lot because we can throw the down there and rely on them to make it,” Goode said.

A dominant second quarter helped the Bulldogs pull away from a tie with the Panthers and go on to a 13-point win.

In the second quarter, the Bulldogs did not allow Piedmont (1-8) a made basket from the field for the first five minutes and outscored the Panthers 14-2 over the stretch. Albemarle led by as much as 21 points in the game before the Panthers narrowed the gap in the fourth quarter.

“Every day, we are just trying to get better,” Albemarle head coach Eric Davis said.

The Bulldogs take on Porter Ridge at 6 p.m. Tuesday night.