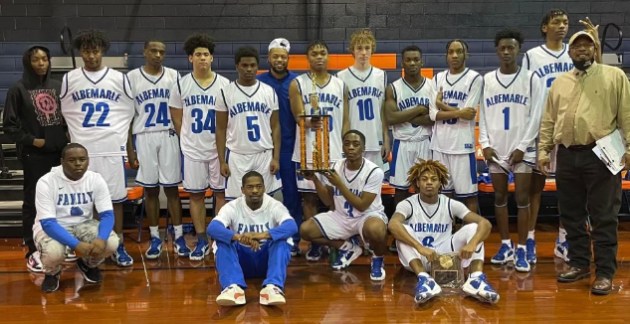 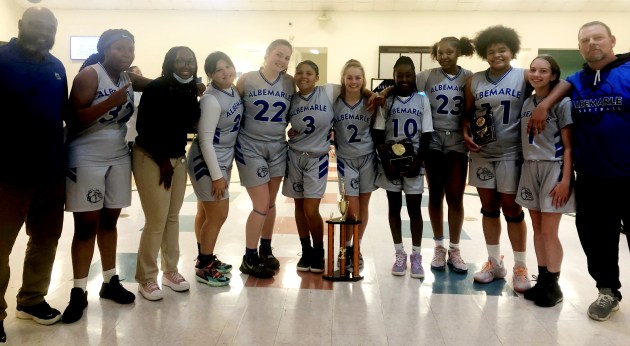 Even before this week’s holiday basketball tournaments opened, the Albemarle varsity squads both played in and claimed championships in a two-day tournament hosted by Anson County last week.

The Bulldogs opened the tournament with a 45-41 win over Christ the King High School of Huntersville.

Amari Baldwin, who would eventually be named the tournament’s Most Valuable Player, led the Dogs with 23 points and added six assists, six steals and four rebounds.

Jasmine Brown added a double-double with 14 points and 11 rebounds while Kai Spencer led the team with 10 rebounds, adding six points and four blocks.

Head coach Eric Davis said it was a hard-fought physical game which was neck and neck the whole way.

“In the second half, I felt our defense and rebounding was the difference.”

The Bulldogs then faced the host Bearcats in the championship finals and won 55-33.

Baldwin finished with 23 points while Brown, who made the All-Tournament Team, added 20 points.

The Bulldogs posted wins over Christ The King and Union Academy to claim the tournament championship.

Against the Crusaders, Albemarle trailed by 15 at halftime and by 14 heading into the fourth quarter. Ali Currie, the tournament’s Most Valuable Player, scored 14 in the final period to lift the Bulldogs to a 71-66 win.

In the win versus the Cardinals, Albemarle got 25 points from Currie and 10 from Price in a 66-51 win. Price was named to the All-Tournament team.

Gatewood and Jabari Brooks each added eight points for the Bulldogs.

Winning the tournament “was a major point,” head coach Chauncey Bruton said, “because we’ve felt like we’ve had a chance to win every game this season, but in the tournament we learned how to finish the game.”

Even after winning the title, however, Bruton said the team’s general feeling was “unsatisfied.”

“We continue to walk back in the locker room feeling like we could have played much better, which is a cool mindset to see in a group of guys who understand we have much bigger goals this season,” Bruton said.