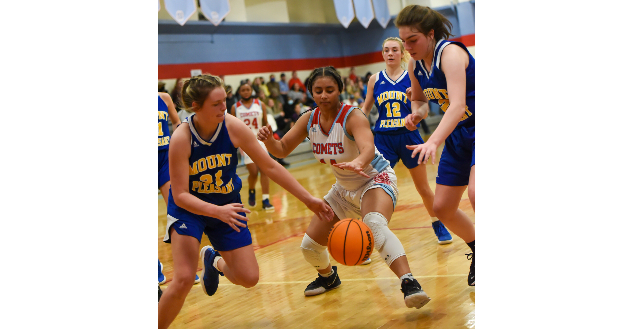 After suffering a loss to open the season, the North Stanly women’s basketball team has been on a tear.

The Comets entered Tuesday’s Yadkin Valley Conference home match with Mount Pleasant having won every game the team has played since the opening defeat.

Two long scoring droughts by the visitors helped North to increase its win streak to 10 games with a 58-39 victory.

Senior guard Lexi Goode led three in double figures for the Comets (10-1, 3-0 YVC) with 17 points, including 10 in the second half. The forward combo of junior Paris Bennett and freshman Shalyn Bell added 14 and 12 points for the Comets,  respectively. Mary Beth Bowers added nine for North.

Mount Pleasant jumped out to an early 6-2 lead, but the pressure defense of North and turnovers forced led to layups on the other end. North went on a 12-0 run over a four-minute portion of the opening quarter in building a 20-15 lead.

Leading by 12 at halftime, the Tigers cut the lead to seven in the third before another defensive stand by North lasting into the fourth period put the game out of reach.

The coach said her team’s chemistry “seemed to be a little bit off” at the beginning of the game, but as North played more as a team in the second half, the Comets “got back into their groove and played their game,” adding “things began to fall in place for us.”

North puts its win streak on the line Friday night at Pfeiffer University against rival Albemarle. The Bulldogs will be the home team at Friday’s game after earning a 69-50 non-conference win Tuesday versus Montgomery Central.