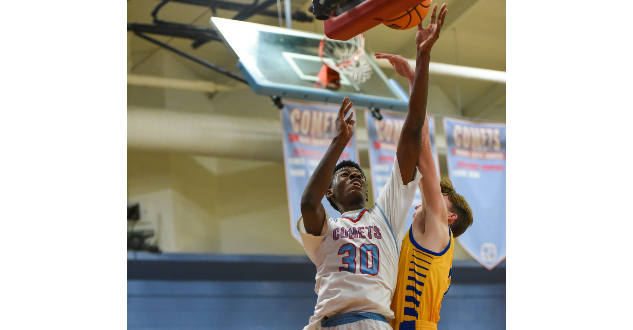 North Stanly's Doug Smith goes for a layup in a recent home game for the Comets. (Photo courtesy of Dawn Lucas)

North Stanly made the quick trip down U.S. Highway 52 to Pfeiffer’s Merner Gym Friday night to renew the long-standing rivalry between the Comets and the Albemarle Bulldogs.

The Comets jumped out to an early advantage and stayed in second place in the Yadkin Valley Conference with a 73-53 win over the Bulldogs.

Doug Smith led three in double figures for the Comets (7-5, 4-1 YVC) with 17 points and made it a double-double, leading North with 14 rebounds.

The win keeps North in second place in the YVC standings, behind Robinson. North has won five of its last six games, while the loss for Albemarle ends a three-game win streak.

Head coach George Walker said the win was huge going into exam week as the Comets will not play again until a makeup game Jan. 17 with West Stanly.

“It’s good for us to have that momentum going into that time. The energy we played with tonight was off the charts,” Walker said.

This week will also bring the first RPI rankings in the state, which the NCHSAA uses to determine which teams make the state playoffs. Four of North’s five losses came in non-conference play to teams with high winning percentages, which will help the Comets’ strength of the schedule, one of the RPI’s determining factors.

“We’ve met a lot of adversity early, so we’re hoping in the second half of the season we can hit our stride before we hit the conference tournament and the playoffs,” Walker said.

The team starts five seniors, including Clay Hatley who had seven points and nine rebounds. Walker said Hatley brings intangibles to the court like going after loose balls.

North’s coach also credited Poole for his assists, saying he was “pushing the ball, finding the open man and making the right play.” He also mentioned Bell and Smith’s defensive efforts blocking shots.

With a shortened season last year and no summer workouts to lead up to it, this season is almost like the junior season for his five seniors in terms of experience. He said North was trying to figure things out early but now he is “very pleased with where they’re at.”

The Comets return to conference play Jan. 18 with Union Academy at home, then North has a rematch with Robinson three days later. North lost that match with Robinson, 67-42, despite being within six points midway through the third quarter.

“I want to think we have gotten better. I’m sure (Robinson) has, too, but I think we’ve gotten a lot better since that game.”