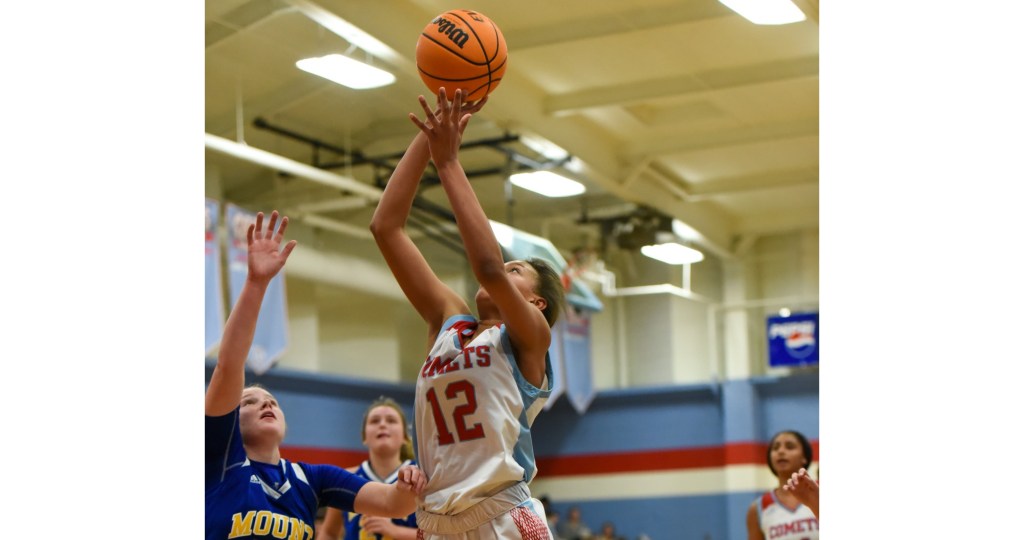 North Stanly's Shalyn Bell goes up for a shot in a recent home game this season. Bell had a double-double in North's win over Albemarle. (Photo Contributed by Dawn Lucas)

First place in the Yadkin Valley Conference was on the line Friday night when the women’s basketball teams of Albemarle and North Stanly met at Pfeiffer University.

The Comets jumped out to an early lead and pulled away for a 77-49 win over the Bulldogs.

Kai Spencer led Albemarle (10-4, 1-1) and all scorers with 21 points and had a double-double, adding 17 rebounds. Jordyn Crump reached double figures for the Bulldogs with 10 points. Amari Baldwin had nine points, seven rebounds, four assists and four steals for Albemarle, while Jasmine Brown had six points, eight boards and three blocks in 13 minutes played.

The Comets built a double-digit lead after one quarter, 25-11, outscoring the Bulldogs in all four quarters of the game. North led at halftime 47-25 and outscored Albemarle 30-24 in the second half.

“The girls worked very hard to prepare for this game,” North head coach Regan Allen said. “With not having four players, they all really took it upon themselves to make sure they were the best version of themselves going into the game.”

Allen said she believed the Comets’ motivation came from knowing the win allowed North to take first place in the conference standings, along with the face many of the players on both teams play travel ball together.

North will not return to the court until Jan. 17 when the Comets travel to West Stanly for a non-conference match.