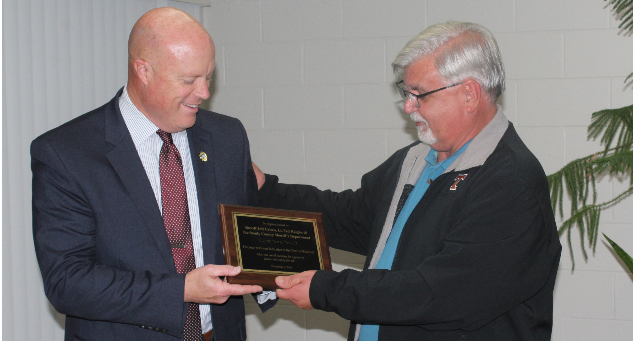 After moving into their new home, the town of Richfield found new tenants for the old town hall building.

The old town hall was transformed into a new satellite office for the Stanly County Sheriff’s Office.

The sheriff’s office leases the building from the town of Richfield for $1 annually. Deputies patrolling Richfield and the northern end of the county will have a space in which to work. The office has enough space for training and meetings.

“I hope they will allow their officers to use it and continue to be seen around,” Mayor Terry Deese said. “(The office) will cut down on response times in case of an emergency, and could be a deterrent for some.”

Crisco said having officers in the Richfield area “has helped us exponentially…our response time has been cut down tremendously. We’re responding to calls a whole lot quicker then we have in the past. It’s a win-win situation.”

The sheriff said the building also will have a use for deputies to be somewhere instead of their cars in case of inclement weather.

“They can sit here and respond to calls as they come in, instead of taking the chance of wrecking a car, hurting themselves and others,” Crisco said.

He said local business owners love having deputies in the area of the old town hall, which is across the street from the Food Lion shopping plaza.