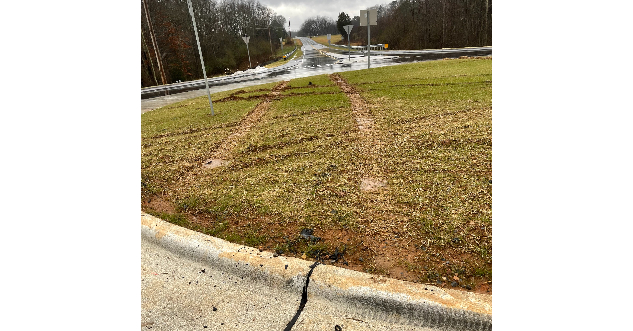 The roundabout at Ridge Street and Mountain View Church road had tire track damage to it last week. (Contributed)

Law enforcement is investigating damage to a roundabout at Ridge Street and Mountain View Church road. (Note: The previous sentence was corrected from an earlier version to reflect the correct address.)

The roundabout has been the recent site for property damage, with tire tracks and damaged signs all over the structure.

Stanly County Sheriff Jeff Crisco said the matter is under investigation and he is concerned about it because repairing the roundabout will cost taxpayers.

“They’re tearing up the property and it costs you and I money, money for the state to go back out there,” Crisco said.

The sheriff noted the roundabout costs the state hundreds of thousands of dollars to construct.

Roundabouts are supposed to slow people down but still keep traffic flowing, he said.

“In the beginning, I wasn’t a big proponent of them, but obviously know that I’ve seen them and been through them, they actually work,” Crisco said. “They keep traffic moving. If there is an accident, there have been minor accidents. It keeps people from being killed or seriously injured.”

Crisco said prior to the roundabouts, the Sheriff’s Office had received complaints of drag racing on the Northeast Connector.

“(Roundabouts) were one way to alleviate the problem,” he said.

Regarding the damage, the sheriff said, “people are just being disrespectful.”