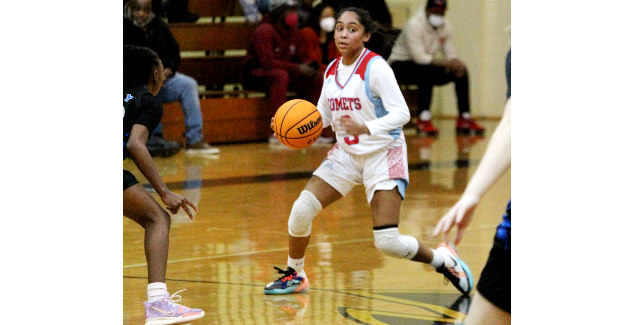 One came when head coach Lonnie Chandler and the women’s squad won the WNCHSAA title in 1976, going 26-0 on the season.

The other streak came in the 2011-12 season when under head coach Greg Speight North won 25 in a row, winning a school-record 27 games to just two losses.

North took its active win streak back to Pfeiffer University Tuesday night for a rematch with the rival Albemarle Bulldogs. The Comets made it 15 in a row by earning a 55-47 victory over the Bulldogs.

The Comets’ big three of senior guard Lexi Goode and the front court tandem of junior Paris Bennett and freshman Shalyn Bell powered the offense for North (15-1, 8-0 YVC). Bell led with 18 points and led North with 13 rebounds, while Goode added 17 points, hitting 7-for-7 at the foul line. Bennett added 11 points and eight rebounds.

North also got solid efforts from Gia Dunlap and Mary Beth Bowers, both of whom had four assists and two steals.

North helped itself out at the free-throw line in the win. Along with Goode’s perfect night, the Comets were 12-of-21 at the line while the Bulldogs were just 3-of-11 from the free throw line.

With Bell, North head coach Regan Allen said it might be the shoes, since she was playing in a new pair. However, her old shoes were sitting on the bench, she quipped, just for the superstition of it all.

“She is always a go-getter player…she’s here to play basketball, and that’s it. That’s one of the things I love about her. She fights hard,” Allen said.

Allen credited the closer result this time around to the young Albemarle team, noting the Bulldogs were mostly freshmen and sophomores.

She said her team’s selfless efforts in the game helped lead to the win.

“(Our players) are stepping up to say, ‘I don’t need to get my personal accolades. I’m here for this basketball team,’ ” Allen said.

North’s coach also credited Bennett for coming up with a scouting report on the Bulldogs on her own.

“I felt like I need to because I knew (Albemarle) was going to give us their best,” Bennett said.

Allen agreed that teams are giving North their best games every time out, to which Bell said, “we just have to go out and give our best game.”

The win extends North’s lead over Jay M. Robinson in the standings and dropped Albemarle into a tie for third place with Mount Pleasant.