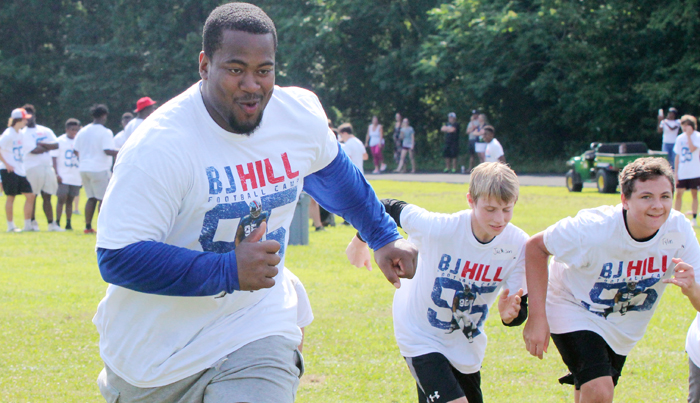 After having spent three seasons with a team struggling to find success, Oakboro native B.J. Hill was traded late in August, just before the start of the 2021 NFL regular season.

Hill had 116 combined tackles and 7.5 sacks in three seasons with the New York Giants, but he had a super opportunity in front of him with the Cincinnati Bengals.

Heading into Super Bowl LVI, Hill’s efforts, including 5.5 sacks and 50 tackles, plus one huge interception in the AFC Championship Game, have been part of turning the fates around for the Bengals.

After having won two games two seasons ago, Hill and the Bengals won the AFC North Division title and have advanced to the Super Bowl for just the third time in the franchise’s history.

During a press interview this week, Hill said he knew it would take a lot of hard work to get to where he is today.

“It is a blessing to be here. I’m truly blessed to be in this spot,” Hill said.

He said being traded to Cincinnati was a blessing.

“I knew God had a plan for me the whole time, to be patient.”

With banners and decorations all over Oakboro showing their support for Hill this week, the former West Stanly standout said their support meant a lot.

“I’m trying to do the best I can to put it on for them. It’s amazing,” Hill said, noting he gets photos on his phone from his family every day showing how many people have posters in their yards and such.

Hill has stayed connected with Oakboro and Stanly County, having hosted football camps during his time in the offseason when playing for the Giants. He talked about staying connected to Oakboro, especially to the youth.

Addressing the players wearing the kelly green jerseys at West Stanly about what it takes to get to where he is, Hill said, “Just work. Put your head down and work no matter what…you never know when that big offer is going to come or the offer to go to the next level.”

The former Colt also mentioned another former West standout, Quan Sturdivant, as someone he looked up to when growing up. Sturdivant played linebacker at North Carolina and played for Washington, Kansas City and Arizona in the NFL.

“He definitely led the way for me, just watching him play,” Hill said.

While feeling down about being traded initially this season, Hill said working with Bengals defensive coordinator Lou Anarumo, along with help from a fellow N.C. State alumnus, linebacker Germaine Pratt, helped him to fit in with the team and make the transition easier.

When asked if he had a message for Oakboro and the West Stanly community, Hill said, “Make sure you tune in Sunday.”

“I’m going to try to bring the trophy home…you all are the reason I’m doing this.”