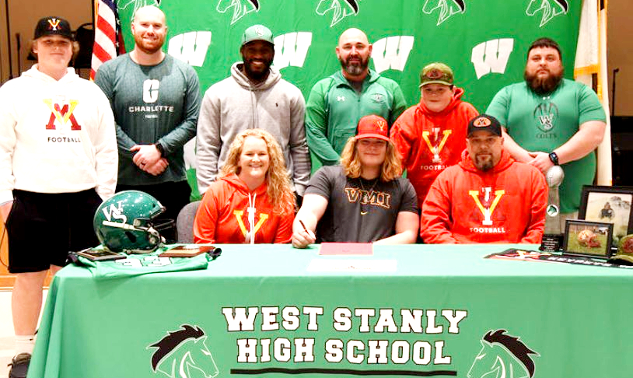 Gavin Hudson’s last football game of his high school career for West Stanly could have been his last ever.

A key player on both sides of the football (fullback and linebacker), Hudson suffered a severe injury to his right knee the last game of the 2020 season, which came in April 2021 due to the COVID-19 pandemic.

He had surgery and immediately started rehab, but because the 2021 season started four months after the previous one ended, he never played for the Colts again.

Despite the setbacks, Hudson continued to work and now has the fruits of his labor to show for them as he signed recently to play D-I FCS football with the Keydets of Virginia Military Institute (VMI).

Hudson said his decision to attend and play for VMI was one about which he thought long and hard.

“I just decided that was the best thing for me in my future. I think of it more as an investment…it will be worth it in the long run,” Hudson said.

A four-year member of West Stanly’s Junior Reserve Officers’ Training Corps (JROTC), Hudson plans after college to serve in the U.S. Army as an officer. He said he was not sure how he wants to serve in the Army, but it will be something on the ground, possibly Ranger School or Special Forces. He said he has a uncle who is a Green Beret.

On the football side, Hudson said he had visited The Citadel, Appalachian State and West Point, but he fell in love with VMI.

“They want you, but you have to want them,” Hudson said about VMI. “I just felt the most at home when I got there.”

Initially, he was recruited as a fullback by other schools, but he will likely be a middle linebacker for the Keydets.

“A big thing for me has been my knowledge of football as far as studying and spending hours in the film room. I thought for me to have an advantage at the next level, it would definitely be with my brain as far as football goes,” Hudson said.

His injury affected his recruiting a lot, the West senior added, noting several schools lost interest after it happened. VMI started recruiting him about four months ago, and Hudson said he is thankful for the opportunity.

Regarding his knee, Hudson said he is in the last part of the rehab and he is “getting back into full swing.” Hudson had a complete reconstruction of both his anterior cruciate ligament (ACL) and the meniscus around the knee.

Hudson called the injury “heartbreaking,” but said his coaches and teammates at West, as well as his family, gave him a lot of support.

“A lot of people have helped me stay on my path, that God would keep me going in the right direction as far as getting back to normal,” Hudson said.

The West senior said he wanted younger kids to see how he came back from his injury and never stopped grinding.

“Don’t let anybody tell you that you can’t do something. Set your mind to it and you can accomplish whatever God wants you to.”