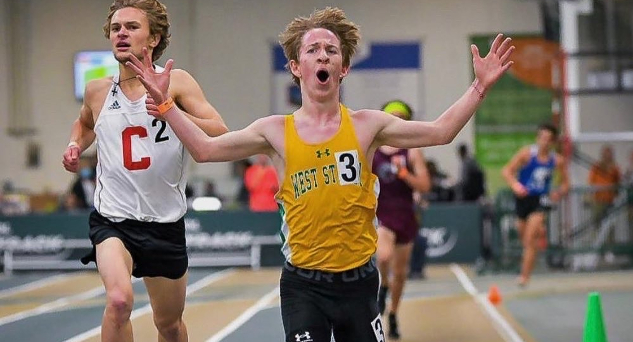 West Stanly's James Shue throws his hands up after crossing the tape as the winner of the 1A/2A state title in the 3,200-meter run at the recent indoor track state title meet. (Contributed)

Indoor track, which usually means a shorter running surface, brings its own challenges to runners used to competing both in cross-country and larger outdoor tracks.

Shorter straightaways and more turns force runners to adjust their strategy and style of running.

James Shue, a senior who ranks among the school’s top cross-country performers, claimed the state title in the longest distance race of the meet, the 3,200-meter run.

When he put his hands up crossing the line, Shue said he really did not believe at first he had won.

“I knew I had secured the win so I threw my hands up…I didn’t think I was going to be able to come back like that,” Shue said.

According to Shue, Owen’s Elijah Jones started the race at a fast pace while he and others “chilled out” for the first mile, or 1,600 meters. After running the first mile in 5:03, Shue said another runner pushed the pace faster at Lap 12 of 16.

“I sat in third most of the race and just let them lead it,” Shue said, referring to the other runners.

He covered the move on Lap 12, then waited for the final 400-meter lap to make his push.

“I felt pretty confident I was going to be able to outkick them,” Shue said.

Regarding the difference between running the 3,200 indoors and outdoors, Shue said you can run faster outside because it is eight laps instead of 16 with fewer turns.

Shue said he would have told anyone before the race he preferred cross-country to track. He ranks sixth all-time at West Stanly in terms of the fastest 5K runs in the school’s history.

However, he said his state title win might have him liking track a little more at the moment.

Shue said he hopes his performance at indoor track could lead to another state title when the outdoor track season starts next month.

“It shows that it takes a lot of hard work to go out and when a state title. Hard work and dedication pays off in the long run,” Shue said.

“He is extremely tough,” indoor coach Wes Herlocker said. “He seems to perform at his best when there is a lot of pressure on the line.”

Herlocker said Shue as a teammate “is always there to help encourage and push his teammates.”

Chad Horn, the school’s outdoor track and cross-country coach, said Shue “is probably the most driven individual I’ve ever had the opportunity to coach. His dreams of doing this started long ago, and he has put in the work.”