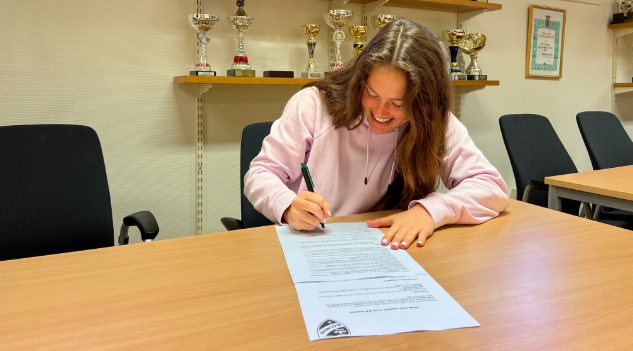 She was a standout player on the Gray Stone women’s soccer team during one of the program’s most successful runs.

Now Annie Habeeb has made school history as the first Knight to sign a professional sports contract.

Habeeb has signed with IFK Kalmar in the town of Kalmar, Sweden, to compete in the highest pro women’s league in the country, OBOS Damallsvenskan. She said it is “arguably one of the top five leagues in the world.”

The first league game will be March 27 and the season runs through November.

Being the first athlete from Gray Stone to play sports “means a lot to me to represent the athletic programs at Gray Stone; it is extremely special. It speaks volumes about the coaches that I had the opportunity to be mentored by during my time at Gray Stone.”

Habeeb played for Jeff Morris her freshman and sophomore seasons and for Carl Collie her final two years at Gray Stone.

“(The coaches) pushed me to be a better player, leader and person while growing my love and passion for competitive sports. They taught me so much that I have taken with me throughout my college career and now into the pros and I will forever be grateful for their guidance,” Habeeb said.

Current athletic director Scott Wolfe said Habeeb “was the highest caliber athlete to come out of Gray Stone in the 20 years we’ve been here.”

In her four years on the varsity women’s soccer team, the Knights were 71-9-5 overall, winning 86.5 percent of their games. Gray Stone won conference titles in 2015 and 2016 and reached at least the third round of the state playoffs all four years. The Knights reached the regional finals in 2014 and the fourth round in her senior year, 2017.

Morris said Habeeb “was the heart and soul of every team she has ever played on. I am thrilled for her to have this opportunity. I could not be more proud of her.”

Habeeb is no stranger to playing soccer overseas. Her club team, Lake Norman Soccer, played in Sweden, Iceland and Denmark while she was in high school.

“I am very excited to be back playing in Sweden as it is a very competitive environment, and the competition is strong. There is a lot for me to learn and room for me to improve here,” Habeeb said.

She said she was excited to play for IFK Kalmar which gets her “in front of some of the best teams in the country, and a lot of other eyes. It is a great stage to start my career and I do aspire to continue to grow and develop and hopefully it can lead me to new opportunities. “

While she said she would love to work her way up the ladder, and maybe even play in the U.S., Habeeb said she “believes in focusing on what I can do at this moment on this team, and the rest will fall into place.”

Planning for life after soccer, Habeeb’s degree in hospitality and tourism management, with a business administration minor, from Flagler College, will allow her to fulfill her aspirations as an event coordinator or tour planner.