Albemarle women advance to third round of state basketball playoffs 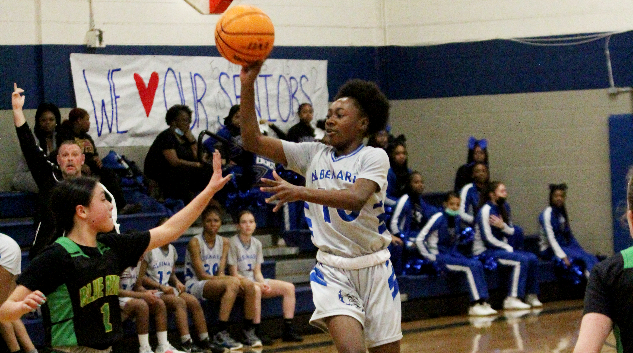 Amari Baldwin puts up a runner in the lane for the Bulldogs in a first-round playoff game this week. (Photo by Charles Curcio/staff)

The Albemarle women’s basketball team entered the state playoffs as one of six Stanly teams which qualified for the postseason.

Unlike some of the other teams, the Bulldogs went in having lost one of the team’s starting forwards, Jasmine Brown, who was injured in the Yadkin Valley Conference tournament finals.

Albemarle responded, as the No. 8 seed, with two home wins this week to propel the Bulldogs into the round of 16.

With the wins, Albemarle will make the long trek up the mountains to top-seed Murphy (25-3) for a third-round game Saturday.

Albemarle has not reached the third round of the state playoffs since the Bulldogs reached the Elite Eight in the 2014-15 season.

The Bulldogs opened the postseason by pulling away early in the game in a 77-56 win over the Blue Ridge Early College Bobcats.

Freshman point guard Amari Baldwin, who leads the team in points per game, put up big numbers in the win, leading Albemarle with 26 points. From the front court, forwards Kai Spencer and Bianca Robinson each added 17 points.

Baldwin and Spencer also had 10 rebounds each for the Bulldogs.

“We needed different girls to step up,” Albemarle head coach Eric Davis said, “and I felt like Bianca did a good job.”

Davis also credited the efforts of Keyzia Benson off the bench, saying “that was her best game of the season.” Benson had five rebounds for Albemarle.

Baldwin, Davis said, “is electric” when she gets into a scoring rhythm. He noted the freshman guard is approaching 500 points this season.

“She’s shooting about 50 percent and is a smart player. She’s learning, but she’s getting better.”

Albemarle faced the No. 9-seeded Mount Airy Granite Bears, who had gone undefeated in the team’s regular-season conference schedule. The Bears blew out South Davidson in the first round, 59-28.

Despite a low-scoring third quarter, the Bulldogs rallied to outscore the Bears in the final period and earn a 12-point victory, 54-42.

Robinson led Albemarle (19-7) with 19 points with Baldwin adding 14. Jordan Crump and JJ Everhardt added eight points each for the Bulldogs.

The Bears were within two points in the second quarter before a Baldwin three from the corner and an Everhardt 3-pointer helped Albemarle build a double-digit halftime lead, 32-20.

“With a group of young players, I couldn’t be more proud,” Coach Davis said. “Mount Airy was a great team, well coached. We had to battle for it.”

Davis added Robinson “was huge” in the fourth quarter along with Spencer as both “got control of the glass” in the final period. He also credited the defense of Baldwin, Everhardt, Crump and Mary Grace Krol for “keeping their great shooters in check.”