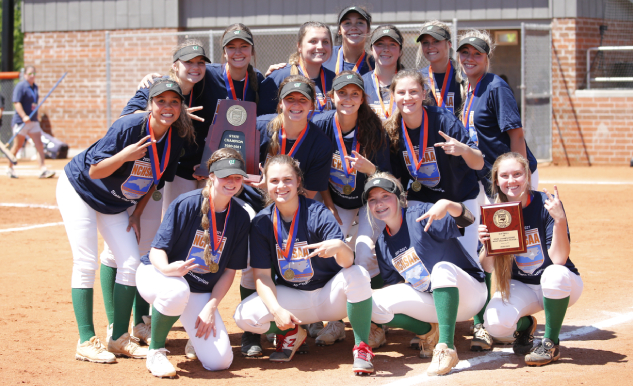 The West Stanly softball team won the 2021 2A state title in June, the second in a row and fourth in school history. (Photo contributed by Earl Bradshaw)

Entering the 2022 spring season, the Colts have a new head coach, but the commitment to high expectations is still the same.

West opened the season this week with a 10-0 win over Porter Ridge Tuesday.

New head coach Emily Smith, who was a standout pitcher and player for West from 2007 to 2010, was an assistant the past few seasons for Craig Carter.

Smith said losing the six seniors has had its challenges.

“They all meant so much to our team and played huge roles in our last few seasons,” she said.

She said West has been working hard in the off-season to come together and work as a team.

“We know that we will have to rely on everyone on our team to help make this season successful,” she said. “Our lineup looks very different this year, but we are excited for this group of players to have the opportunities for which they have worked very hard.”

The high expectations, Smith said, both on the field and in the classroom, will not change, adding the team is taking things one day at a time.

“We are learning from our mistakes and making adjustments as we go. We will experience success and failure together and will be stronger for it,” Smith said. “Coach Carter came to West Stanly and forever left a major impact, and I am very thankful to have been able to coach with him for the last several years. He taught me about the game of softball and became a great colleague and friend. He is a great coach and an even better person. I am privileged to coach after him and will do so to the best of my ability. “

Senior Ashlyn Hughes at first base will be one player Smith said who the team will look to step up this season.

Having played first base since her freshman year, Hughes “has been in those tough pressure situations and can help lead our team through them,” Smith said. “We will look to her for production in the lineup as well as leadership on the field.”

One of the biggest positions to fill this season was pitcher, with Jordan Hatch, the 2019 N.C. Player of the Year and All-American, having graduated. Junior Lily Huneycutt moves into the circle and will also be a solid bat in the lineup, Smith said.

Newcomers will play vital roles this season, but Smith said looking at the lineup, she feels like “we are all newcomers in a sense.”

One newcomer is junior Teagan Ritchie. Verbally committed to Charlotte, Ritchie will be a leader on the field bringing a “terrific softball IQ” to the middle of West’s infield, Smith said.

Smith said she was excited for this year’s group of players to “show what they are capable of in continuing the strong tradition of West Stanly softball.”

The goal since NCHSAA fast-pitch softball started in 1996 for West has been to win state championships, but the team also has other ideas.

“Along the journey of shooting for that goal, we want for our players to enjoy playing for their school and community. Playing for Coach (Wesley) Kidd and with my friends at West Stanly was one of the highlights of my softball career, and my goal as coach is to create a positive experience for these girls,” Smith said. “I believe this season holds a chance to learn and grow as players and coaches, while competing at a high level and hopefully getting a chance to play for another state championship.”

In Tuesday’s game, Huneycutt pitched a five-inning no-hitter, walking one and striking out 11. At the plate, Ritchie was 3-for-3 with two home runs and three RBIs, while Hughes had a triple and drove in two runs.