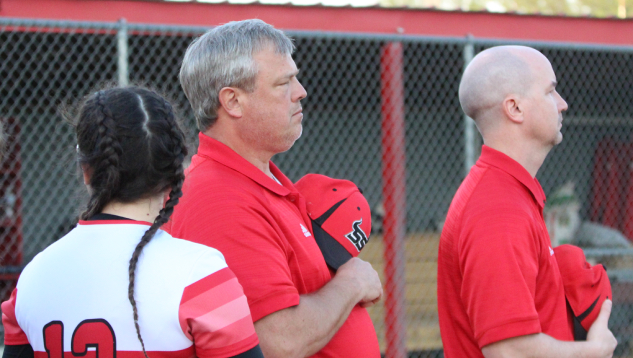 David Poplin has coached South Stanly softball since 2005 and has built a winning tradition in Norwood.

As the Bulls open the season as the defending 1A Western Regional champions, the South head coach celebrated a milestone in the first week of the season.

With this season’s 15-0 opening over Forest Hills in three innings, Poplin earned his 300th career win.

Poplin has won more than 70 percent of the games he has coached for the Bulls. Including a win Thursday over Anson, he is 301-115 lifetime at South (72.4 percent) with two appearances in the 1A state finals, including the 2012 state championship.

“I love what I do and I’m extremely proud of our softball program,” Poplin said.

“The strength of our program is totally dependent on the student-athletes that come through here and play our sport. I love how our players buy into our approach towards the game in general and the way we prepare for individual games as well.”

Poplin said South has ” been very fortunate to have always had good players and players that want to be coached and work hard toward team goals.”

The South head coach also credited assistant coaches Jeff Springer, who was with South from 2004 to 2012, and Matt Little, who has been with the Bulls since 2012, for their efforts. Springer “has been a big influence in my coaching career,” Poplin said. He added Little’s “value to the success of our program is immeasurable. His input is extremely important to me and our program. We work very well together and he is always working to make us better.

Poplin also said he has had good school administrators and athletic directors, which “is very important to the success of any high school coach.”