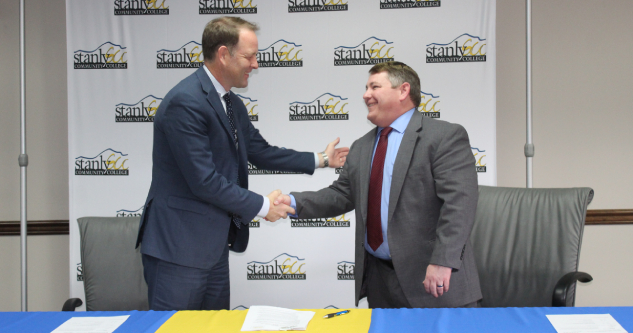 Pfeiffer University president Dr. Scott Bullard, left, and Stanly Community College President Dr. John Enamait shake hands after signing an agreement which will give SCC students a discount when continuing on to Pfeiffer for a four-year degree. (Photo by Charles Curcio/staff)

College students wishing to stay in Stanly County and save on tuition will soon have another opportunity to get a four-year degree and never leave the county.

According to SCC Head of University Transfer John Bowman, the agreement says transfers to Pfeiffer from SCC will get a $20,000 transfer scholarship. Online students with 2.5 GPA’s or better will get a 20 percent tuition discount.

Nursing students in the online RN to BSN pathway will be charged $189 per credit hour if maintaining a 2.5 GPA. Elementary education students must have a GPA of 2.75 or higher for admission to receive the transfers scholarship.

The articulation agreement also allows students to receive a waiver from Pfeiffer’s Residential/Off-Campus Housing policy, which calls for students to live on campus.

Enamit said SCC prides itself on being “if not the best, one of the best community colleges in North Carolina and the nation…we take pride in providing a high-quality education to everyone who comes to us.”

He said SCC’s graduation rate is at 56 percent, the highest in the school’s history and well above the national graduation rate, which is around 20 percent.

In a conversation years ago with Bullard, Enamait said his vision was “how impactful is it for residents in Stanly to be able to receive all of their higher education without leaving the county.” He said he envisioned a stronger partnership between the two schools, adding “there are not a lot of counties in North Carolina that [students] have the ability to not leave the county to receive high level degrees.”

Bullard said the signing was a great day for both institutions, adding after having conversations with Atrium Stanly and Stanly County Schools, it is really important “that we keep our best here.”

“The thing I’m proudest of is that we aim, with several partners, to make the opportunity to stay in Stanly County increasingly affordable,” Bullard said.

Below are the majors involved in the new articulation agreement.