On Tuesday, many from Stanly County and beyond will gather to mark the passing of someone whose hard work and dedication to the people will not soon be forgotten.

Ernest “Bud” Morton, who passed away last week at age 95, will be remembered by Stanly as a man of many endeavors. 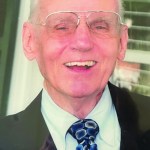 Many will recall seeing him running around the streets of Albemarle training for marathons starting in his 50s. He kept running until well into his 80s.

Peter Asciutto, owner of Vac & Dash in Albemarle, said Morton was one of the first customers to come in to his store, which sells running shoes and apparel.

“He told me stories about running,” Ascuitto said.

Asciutto said he was “incredibly saddened” at hearing of Morton’s passing, saying he was one of the original marathon runners in the local running community.

Morton did not start running until he was in his 50s, Asciutto said, adding the way he ran was unique.

“He had a certain gait about him. He would tip to his left side a little bit when he ran. You could see it from a distance,” Asciutto said.

To his recollection, Asciutto said Morton ran in order to compete in the Charlotte Marathon. He described Morton as being an inspiration for others to get into marathon training. He ran his last marathon at 78.

Running led Morton to carry the Olympic Torch in 1996 preceding the summer games of the XXVI Olympiad in Atlanta.

Professionally, Morton was a practicing attorney for 59 years, from 1953 to 2012. He served eight years as the chief prosecutor, or solicitor as it was known at the time, from 1960 to 1968. Morton was a trial lawyer in both civil and criminal cases until the final six years of his career.

“We’re all better, particularly those of us who practiced law, having worked with or opposed to Ernest Morton,” Brown said.

“[He was] a pillar of integrity and competence,” Brown added.

When Brown first worked as an attorney with his father in 1966, he said his father told him if he was not available and needed help, he should go to E.H. Morton.

“Ernest Morton could give me good, sound advice. He was always willing to help another attorney, particularly when it did not compromise his own clients’ cases,” Brown said.

Brown said Morton was “a tireless worker,” adding, “he could outwork and out-prepare everybody.”

He also said Morton “earned the respect of judges and court personnel” not just locally but throughout North Carolina.

“Ernest was a man of integrity with an unblemished character. What a role model.”

Morton also served for 20 years as counsel to the Stanly County Board of Education, and later was named recipient of the Order of the Long Leaf Pine.

In the community, Morton served many civic groups and charitable organizations, from the Stanly County Family YMCA and Stanly Community College to the Special Olympics and the American Red Cross.

One organization he spent 62 years with was the Albemarle Lions Club.

Rob Brown, a 26-year member of the chapter and current president, spoke about Morton’s contributions to the club.

“His accomplishments include past president of the local club, credited with starting the Summer VIP (visually impaired person) party and [he] conducted the annual officer installations for as long as I can remember. Lion Bud Morton was a valuable member of our club and will be missed.”

If there was one place Morton spent the most time, it might be First Baptist Church of Albemarle. He was a member for 88 years, including years as a deacon and later chair of Deacons. Morton also taught Sunday school for more than 50 years.

“Bud has been a part of this church his whole life, and quite a life he has led,” Dr. Kendall Cameron, senior pastor, said. “He was such a big part of just about everything connected with the church…not just the things he did at First Baptist Church, but the Christian life he led in our community, and all of the things he did for so many people in Stanly County, and really the whole state.”