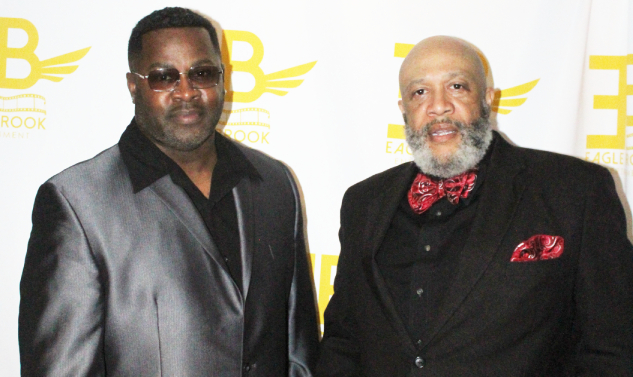 She has written several published novels, but Norwood native E.W. Brooks has continued to expand her creative interests, including into filmmaking.

Brooks premiered her movie “Church” Sunday at the Eastgate Cinemas in Albemarle, the first of three to be made in a deal between Eagle Brook Entertainment, Brooks’ production company, and Glass Slipper Pictures and Homestead Entertainment.

Several of the actors in the film, including members of the Bennettsville AME Zion Church in Norwood, were in the film. The church also served as a set for several scenes.

Locations in Charlotte and Ansonville were also used as filming locations for the movie, which follows the story of a deacon’s wife, Melania Tite, played by Monica Crumpler, and her straying husband, Deacon Tite, played by Clarence Harris. The story delves into the deacon’s affair with another woman who becomes pregnant with their child. The other woman, played by Saudia McCray, complicates the situation when telling Tite’s wife of the pregnancy.

Finding faith in God through difficult times was one of the main ideas in the faith-based movie, with the character of Melania coming to a crossroads in her life.

Brooks has made several films, along with authoring the award-winning “Mafietta” book series. She said “Church” will soon be on the Tubi streaming service.

“Church” is the second in a series of films for Brooks, including a movie based on the first book in the Mafietta series. Brooks also has made a film, “Blind,” about a survivor of sexual assault, and is in pre-production for a feature-length movie, “Legacy.”

Brooks was unable to attend the premiere in person, but during a phone interview she said “Church” is about redemption.

“It just shows how we often get caught up in titles and such, but at the end of the day, God is going to be God,” Brooks said. “He is going to sort it out.”

Brooks said the characters through church and faith found their own redemption.

“My goal as a filmmaker is to show stories about women who overcome obstacles that seem insurmountable and win. I want to cover women at every facet,” Brooks said. “I just want to show women who win regardless of the obstacles.”

Brittany Williams, Brooks’ sister, said she was happy with the turnout to see the film.

“The love everybody has shown her, it’s a true testament that dreams can come true for anybody, even a small-town girl from Norwood,” Williams said.

Dr. Germaine K. Snuggs, who played the pastor in the movie, said he hopes the movie will help everyone to realize “life is nothing but a continuous education program and that we continually learn. We continually evolve; we continue to grow.”

Snuggs said “things that we’ve done that we may not really be fond of can be fixed, and we can grow from those things.”

He said seeing the movie for the first time at Sunday’s premiere showed what “a remarkable job” Brooks did on the film.

“She’s truly talented. She has a vision, and she implemented it through this the way she desired, and I was happy to be a part of it,” Snuggs said.

Harris, a retired Army veteran who has worked on other television projects, said working with Brooks was “a remarkable experience.” He said he had never worked with a female writer, but it was great to help bring her project to life.

He said the film is important because it brings attention to stories that are never told.

“It’s important to get it out and let the people see it and listen to it, because it could help someone else,” he said.

Brooks said she will begin filming in August in Hawaii for a new project called “Resist.”

Brooks said staying rooted to Norwood and Stanly was important, even after leaving home, which is why she filmed locally.

“It took me leaving home to see the possibilities in the world,” she said. “It’s important to film as much as I can there because I want our younger generations and our older ones to see what’s possible when you trust God.”