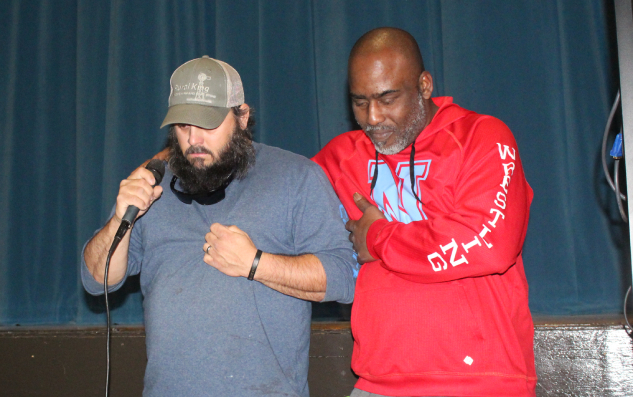 Billy Talbert, a parent of one of the students in a recent social media video, speaks to the community and North Stanly staff at Friday's meeting. Pictured standing next to him is Bobby Bryant. (Photo by Charles Curcio/staff)

With tensions at North Stanly High School recently elevated by a resurfaced social media post, students and parents met with members of the Stanly County Schools (SCS) staff and central office to discuss the situation.

Dennis said the reason for the sense of urgency of having the meeting was that staff did not want to wait.

“There is no manual for this,” he said. “This is why we have you here, and that’s why we need your input,” referring to the parents in attendance.

“We know there’s things we should have done differently and will do differently in the future,” he added. “However, what we need moving forward from this is we need our students to feel safe in school.”

Those in attendance were asked to take part in an online survey on their smartphones to speak to their fears and hopes regarding North Stanly. Of the 100 surveys, including surveys from North staff taken earlier in the day, “miscommunication and a lack of understanding causing barriers between school and community” was one of the leading choices. Another high vote getter was “cellphones and social media negatively influencing student behavior and learning.”

The floor was opened for parents, students and others to speak. Wendy Wimbush, an ordained elder who has a student at North, said “if you believe that all this that is going on is about a video, then you are misled or mistaken in your thoughts.”

The three-second video in question, which was first posted on Snapchat and has since been shared to Facebook, shows two white females singing the lyrics to “Alabama (expletive),” a song by Clifford Trahan, also known as Johnny Rebel, a singer cited by NPR as having been a “white supremacist musician.”

Wimbush said it was time for parents “to stand up and take accountability of your kids, our kids and the situation here.”

North parent Sasha Williams asked parents of white students how they would feel if they attended a school where the demographics of faculty and staff were “100 percent black.”

“How could you as a parent send your child to that school? How do you think your children would feel?” Williams said.

North graduate Jasmine Scott said she came back and taught for two years at the school, but left because of how she felt in the classroom.

“A lot of parents would come up, and because their child was struggling in my class, because I held them to high expectations, I was belittled in my position,” Scott said. “It’s not just about the students.”

While most of the speakers spoke of things like love, understanding, forgiveness and reconciliation, one speaker made a racially charged statement which caused several people in attendance to leave.

Responding to the comment, Smith quickly interjected, saying, “the priority is our students. Their feelings are very real.”

North student Andre Hill spoke of his own experiences at school, saying because he disagreed with one teacher, he had to take the class virtually while sitting in the library.

Hill said he was told by a North teacher the Black Lives Matter movement is ignorant. He also said other minorities in the school, including LGBTQ students, did not want to come to school because they did not feel welcome.

Student body president Mac Barfield said the school has a Unity Club “for situations like this,” but noted the school “has a wonderful history of not talking about things no matter one side or the other, just push your feelings deep down and not talk.”

Barfield said many students this week have come to him wanting to talk. He said “come to our meetings. Let’s get everybody involved.”

Billy Talbert, a 1998 North graduate, identified himself as the father of one girl in the social media video. He said his daughter has apologized to her peers and been remorseful for the video.

“I’ve read about (how) my daughter should be punished for what she did,” Talbert said through tears. “If you don’t think this won’t have lifelong consequences, you are sadly mistaken. Friendships have been altered possibly to where they will never mend. Her employment has been compromised.”

Talbert said he came to the meeting “to give a voice to my daughter because I know in my heart, and everyone in here that knows me and my daughter, knows that no ill will or harm was meant by her video. It’s not excusable; she is 15 years old.”

Blake-Lewis presented an action plan which included hiring more diversity in teachers and staff, along with developing a support system for them. The plan also included: community leader mentor groups, effective cultural and diversity sensitivity training for teachers and students, reinforcing the student outlet to report concerns via the Say Something app, top down transparent accountability, rules and consequences, enforcement of a statement condemning racism, educating and enforcing the current cellphone policies, maintaining a safe school environment, challenging children to be successful young adults while giving them accountability and priority, and smaller class sizes, along with regular community forums.