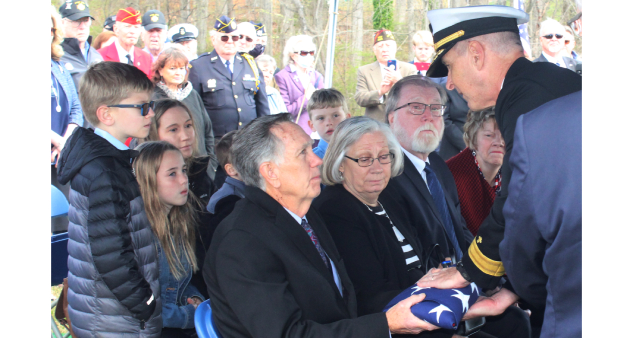 It took 80 years to happen, but a sailor killed at Pearl Harbor has come home to Stanly County.

On what would have been his 100th birthday, Edward Talbert was laid to rest Saturday afternoon in the Prospect Baptist Church graveyard with full military honors. Talbert died at Pearl Harbor Dec. 7, 1941, and is recognized as the first person from Stanly who gave their life during World War II.

Michael Crisco, nephew of Talbert, spoke at the ceremony, taking about his uncle having volunteered to serve in the Navy in 1940. Talbert graduated from New London High School before enlisting, Crisco said. His uncle enlisted in part he believes to find work and send money home to the family.

Talbert, born March 26, 1922, served on the U.S.S. Oklahoma at Pearl Harbor as a range finder, and prior to the attack he wrote his family to tell them not to worry about the United States entering World War II.

The Oklahoma was torpedoed seven times in the surprise attack and sank. Crisco said of an eyewitness report related to him, at the time of the attack, Talbert was on duty at his station on the port side of the ship. His remains were one of 35 identified.

In 2013, Crisco said he was contacted by the Navy about remains being exhumed from the Oklahoma, but it was last year when his family was asked to submit DNA samples to identify Talbert’s remains.

“After 80 years, it was a miracle,” Crisco said about the news coming back identifying his uncle’s remains. “I felt so overwhelmed about it.”

When asked when his family would like to host the ceremony, the family decided March 26, which would have been Talbert’s 100th birthday.

The Singing Americans provided music for the ceremony while members of the local veteran community were present. Several leaders spoke at the ceremony, including Stanly County Veterans Services Officer Bo Almond and Bill Crawley, from the Talbert-Wagner Veterans of Foreign Wars Post 6369, for whom the Richfield/New London post is named.

Along with a 21-gun salute and full military honors, Rear Adm. Terry Eddinger, the deputy chief of chaplains for reserve matters, spoke to the family and others at the graveside portion of the service. Thomas Hahn played “Amazing Grace” on the bagpipes, and a Navy bugler performed “Taps.”

Regarding the ceremony and the community’s response and attendance, including many veterans from Stanly and their families, Crisco said, “everybody cares about the military. The community is strong and supportive.”

Crawley’s words summed up the emotions of many at the event as he finished his comments with a salute and the following words: “Everett, welcome home, brother.”