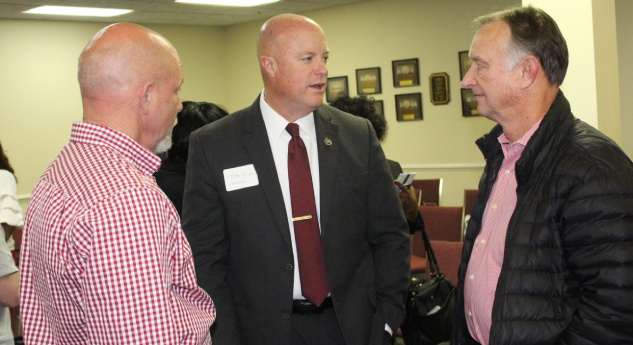 State Treasurer Dale Folwell was the keynote speaker, giving citizens in attendance an update on the state treasury. Unable to attend in person, Folwell spoke to delegates on a video conference call.

Folwell said the state had a AAA bond rating for its current bonds. He said the state’s debt over the past five years and through the next eight will be reduced by 73 percent.

“That’s a credit of doing what we’re supposed to be doing…balancing budgets, building surplus and building rainy-day funds,” Folwell said.

The state treasurer said the state’s pension fund was at $125 billion and was “safe and secure.”

“A lot of state and local employees in this room depend on this pension plan…it is one of the safest pension plans in the United States,” Folwell said.

Part of the plan, the treasurer said, was $80 million in Russian investments which are not trading. He said he was asking Congress to pass a law to allow the state to sue Russian president Vladimir Putin and the government “for his murderous activities,” referring to the current conflict in Ukraine.

Folwell also talked about fighting secret contracts in terms of health care plans to lower costs. He said after a recent MRI he intentionally allowed his bill to go to collections even though he could pay it.

“I wanted to experience exactly what the citizens in North Carolina are experiencing with medical billing,” Folwell said.

The treasurer also mentioned a state website, nccash.com, which citizens can use to look up and find if any unclaimed cash is theirs. Folwell said the total of unclaimed money in the state is close to $1 billion.

Several candidates for state positions on different judicial boards, along with candidates for the United States senate and others, spoke to members of the local Republican party.