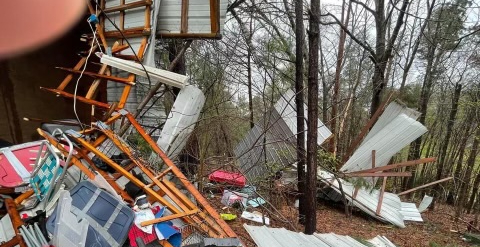 A weather event last Thursday which did significant damage to a Cottonville house was confirmed as a tornado.

According to a public information statement from the National Weather Service office in Raleigh, Thursday’s storms produced a tornado in northwest Anson County which tracked northeast into southern Stanly.

The tornado was an EF-2 rated tornado according to the Enhanced Fujita scale, with estimated peak winds at 120 miles per hour. No injuries or fatalities were caused by the tornado. EF-2 is considered a “strong” tornado with winds between 111-135 mph.

According to the report, the tornado lifted 1.5 miles southeast of Cottonville after touching down in Burnsville. A house in Anson was shifted off its foundation, while a nearby chicken farm received substantial damage.

The house of Belinda McIntyre had its porch taken off and an outbuilding destroyed by the tornado as it lifted off the ground.