The art of winemaking in Stanly County has quickly blossomed into  distinctive wineries, each with its own unique characteristics.

Dennis, Stony Mountain and Uwharrie vineyards offer fine wines and beautiful settings in which to enjoy them, either on your own or as part of parties, weddings and other special events.

Muscadine Is a Must

Dennis Vineyards and Winery, at 24043 Endy Road, was the first winery to open in the county in 1997 by Prichard Dennis.

In the 1980s, Dennis began making wine as a hobby and passed the hobby on to his son, Sandon. Both gave away the wine they made for years before the winery opened in 2000.

Specializing in muscadine wines, Dennis features popular lines of sweet and dry wines, many of which can be found on local grocery shelves and at the winery.

With fun holiday names like “Blitzed” and “Santa’s Secret” and the popular “Holiday” line to best sellers like the Spring wine, Dennis has a wide selection of muscadine favorites. Dennis also has the Carlos Dry and chardonnay wines for those who like their wines dry.

Just a Stone’s Throw Away

In terms of proximity to Albemarle, Stony Mountain Vineyards is the closest at 26370 Mountain Ridge Road.

Sitting in a mountain range said to be one of the oldest land masses in North America, the vineyard grew grapes for a long time but now it’s more of a winery, according to owner Ken Furr. 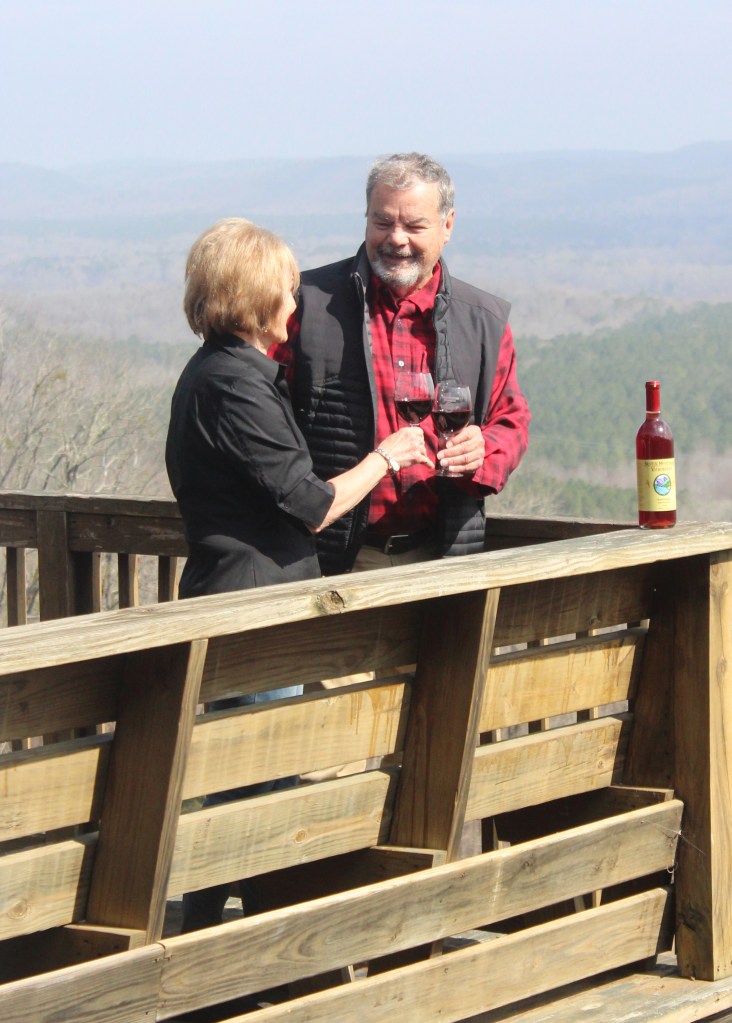 One aspect which makes Stony Mountain unique is the view from the back porch, where visitors can enjoy a bottle of wine and enjoy elevated views of the Yadkin River.

“I don’t know of any winery in the state which can compare with our vista,” Furr said.

The tagline for the third Stanly vineyard probably raises an eyebrow or two when viewed online, but describes the feelings of the owners: “Serious Wines for Non-Serious People.”

Named for the nearby mountain range, the vineyard is at 28030 Austin Road, just off N.C. Highway 73 in the Millingport community. Uwharrie features a wide range of dry and semi-dry red and white wines to sweeter fruit wines.

Chad Andrews, the winemaker for Uwharrie, said the winery “tries to make (a wine) for all different types of people.”

Noting that many people living in the Carolinas were born elsewhere and moved here, Andrews said “you have to play with people’s different taste buds.”

He also added Uwharrie “tries not to rush” when making its wines.

“We try to make the quality that we want,” Andrews said.

One unique aspect of Uwharrie Vineyards is the amount of land the property has — 87 acres in all. As a certified Audubon Cooperative Sanctuary, visitors may see a variety of wildlife while enjoying a beautiful day outdoors or just sitting on the patio.

Dave Braswell, who along with his wife Anne founded Uwharrie, had the idea for staying connected with wildlife.

“It’s just so unique to (be able to) get out of the Charlotte area, which has become so saturated,” Andrews said of the vineyards’ wildlife.

The property features bird houses and bat houses, which help the vineyards as well with bats taking care of many insects at night. Andrews said the bats’ efforts mean “less chemicals you’re having to buy and spray.”

Andrews said keeping visitors connected to local businesses and restaurants is a part of Uwharrie’s efforts, recommending them to people either not from or new to the county.

Adding chairs, a water fountain and soft music in the background, he said, enhances the ambience of Uwharrie Vineyards.

“We try to get people to come out and relax for the afternoon.”