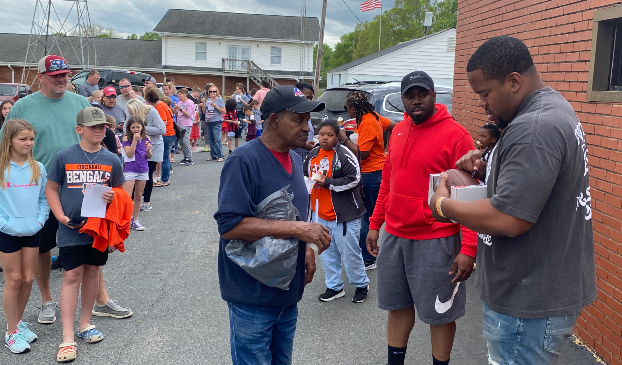 B.J. Hill autographs a football as the crowd patiently waits to talk with the hometown hero.

Thirty minutes before the event was supposed to begin, a line had already formed outside of Main Street Cup and Cone in Oakboro, people dressed in orange and black who were eagerly waiting to enter the ice cream shop.

They were looking forward to seeing their hometown hero, B.J. Hill, defensive tackle for the Cincinnati Bengals, who was in town to thank the community for its support during the past several months, which saw his team rally to defeat the Kansas City Chiefs in the AFC Championship Game and come within a few points of winning the Super Bowl. 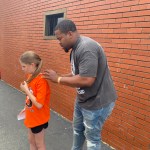 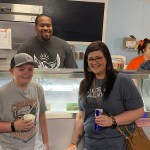 “They gave me so much energy throughout the season that it’s only right to give back to them,” said Hill, a West Stanly graduate, about the support from the community during his team’s playoff run.

Following the Bengals’ dramatic 27-24 overtime win against the Chiefs at Arrowhead Stadium, which saw Hill make an acrobatic, game-changing interception of quarterback Patrick Mahomes in the third quarter, the Stanly County community — including many schools, churches and businesses — suddenly became awash in orange and black. Members of the Stanly County Board of Education, during their February meeting, even participated in the “Who Dey” chant.

Though he tried to stay off social media during the lead-up to the big game, he said he was certainly aware of all the overwhelming love and support the community was showing back home.

“It gave me a lot of extra confidence and helped me throughout the (Super Bowl) game,” he said. “It was really cool to see.”

Hill ended up with three tackles, including one tackle for a loss, in the Bengals’ 23-20 Super Bowl loss to the Los Angeles Rams.

The support was also not lost on his family, many of whom were at the Saturday event to show their appreciation.

Gabby Hill Jones, Hill’s older sister, was encouraged by all the people who came out to see her brother.

“To see the support of a small town just coming out and showing their love for a young boy from South Oakboro is amazing,” she said. 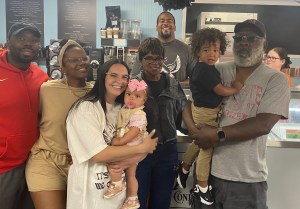 At least 500 people, many of them young families, showed up in support of Hill — a testament of how much he means to the town.

“It’s always been a tight-knit community, and with B.J. coming back, it just shows you how tight it is,” said police chief T.J. Smith. “He’ll always be rooted here.”

Many residents took the time to exchange heart-felt hugs and share personal stories with Hill.

“I just told him, ‘I’m so proud of you,’ ” said Oakboro resident Christy Morgan, who has known Hill since he was a small child and has followed his career since his days at West Stanly.

While she and her family proudly donned Bengals T-shirts, their allegiance has always been to the player as opposed to any one team.

His mother Myra Hill, who still lives in town and was busy snapping photos of her son interacting with his many supporters, hopes her son’s success can help inspire other young people to follow their dreams.

“If he can do it, from a small town with one stoplight, they can do the exact same thing,” she said.