Before Pfeiffer took to the field, named after the former Falcons head coach, the school hosted baseball alumni for a ceremony to honor Ferebee’s legacy. The pregame ceremonies came before the Falcons hosted Methodist for a USA South Conference matchup.

A member of eight Halls of Fame, including Pfeiffer, Stanly County and the North Carolina Sports Hall of Fame, Ferebee won 697 for Pfeiffer from 1958 to 1987, winning 10 conference titles and five NAIA District championships. He also served many years as the school’s athletic director.

Many of the alumni in attendance contributed to the book “His Field, Our Dreams,” a collection of stories about Ferebee collected by 1968 Pfeiffer graduate Bob Gulledge. Speaking in the pregame ceremony, Gulledge said Ferebee “was the finest teacher on how to play baseball.” 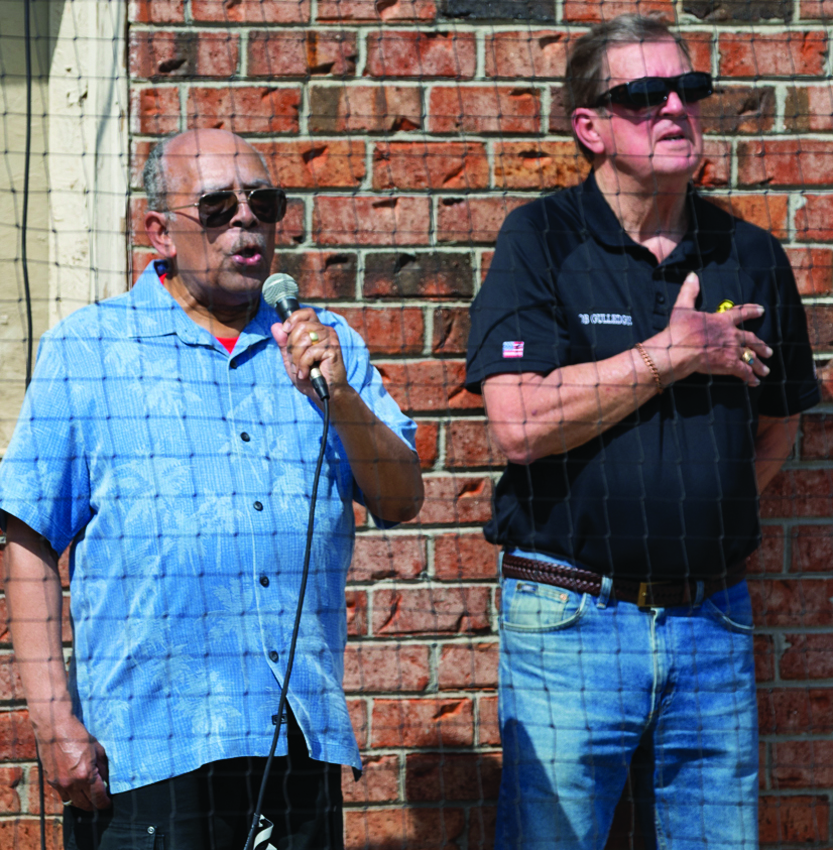 George Singleton, of the Pfeiffer Class of 1968, sings the National Anthem before the game against Methodist Saturday. He is joined by Tom Childress. (Photo courtesy Casey Habich/Pfeiffer University)

“I stayed 14 years as a basketball coach, and he became a good friend, even better as I was retiring from Pfeiffer and going up the road to Salisbury,” Childress said, referring to his time at Catawba College.

Childress said Ferebee always kept pictures and newspaper articles about his players after graduation so he could follow what they were doing.

The former Pfeiffer coach and AD spoke to the players on both teams, challenging them to thank a coach or other individuals not from their families who helped them with their baseball career.

Jack Ingram, a Pfeiffer professor who coached the softball team for many years and for whom the softball field is named, spoke about Ferebee after he retired.

Ferebee and his wife started attending Pfeiffer basketball games, then after his wife passed, the coach started sitting in on basketball practices during the time Dave Davis coached the team.

Ingram also said Ferebee could ask someone where they were from and always knew prominent people who lived there, or the creeks and rivers which ran through them.

George Williams, Pfeiffer Class of 1968, sang the national anthem before the game.